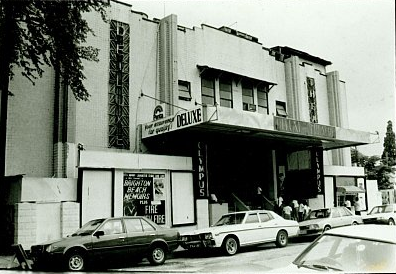 This was one of the top cinemas located in the town of Port of Spain on the island of Trinidad. The Deluxe Cinema was built by William Pettigrew Humphrey, an established cinema mogul from Guyana. It opened in 1937 (the ‘red carpet’ opening ceremony was attended by Humphey Bogart) and was designed in the modern Art Deco style of the day, with seating provided in stalls and balcony.

After the death of Humphrey it was taken over by the Timothy Roodal chain of Carribbean cinemas and operated until well into the 1990’s.

From December 2004 it was converted into a nightclub named ‘The Den of Zen’ which retains the Art deco styled facade, lobby areas and terrazo floor tiles.