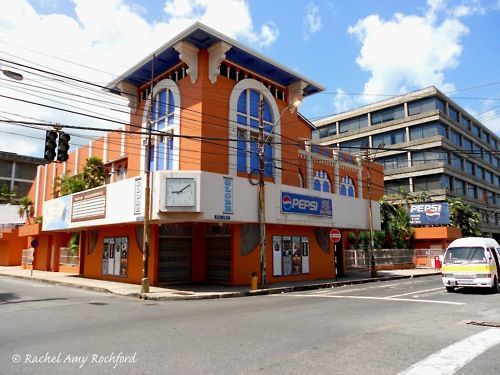 The Globe Cinema at Green Corner was opened as the Metro Cinema by Haji Gokool Meah on March 19, 1933. He was already in his 80’s and was the owner of several cocoa plantations on the island. He fell out with MGM having screened competitors’ films and thus changed the name to the Globe Cinema. It was a rather ornate faux Classical-style building with a stage suitable for live performances and a balcony. It was owned recently by Tony Sirju who closed it January 2013, as reported that March, but it was purchased from him by businessman Satish Pariagh in 2014 who intended to preserve the building and keep it going as a cinema. In September 2014 it hosted the Trinidad and Tobago Film Festival including the premier of “Pan! Our Music Odyssey”. The cinema was the last stand-alone single screen cinema remaining on the island since the closure of the Palladium Cinema, although it does not appear to be currently open.