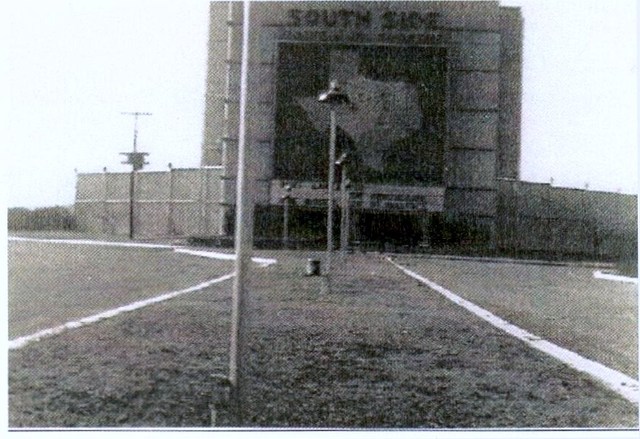 The 780-car capacity South Side Drive-In opened September 24, 1949 with William Bendix in “Life of Riley”. It was located at the 4800 block of Highway 81 (now I-35W and Felix ). It featured a State of Texas mural on the screen tower, covered patio seating and a playground.

Operated by the Lutzer Brothers Circuit in the early sixties, along with the Co-Ed Drive-In in Denton TX and the Ship Drive-In in Durant, OK. Owners were David and Jacob Lutzer, headquartered in Dallas, TX. More specifically, the two Lutzer brothers owned the Texas drive-ins while Mrs. Jacob Lutzer owned the drive-in in Oklahoma. Perhaps she had a good divorce lawyer.

The South Side Drive-In Theatre closed sometime in 1967. It was soon demolished and quickly cleared for the construction of the shopping complex that contained the K-Mart, a Kinney Shoes store, and the Cineworld 4 Theatre.

I didn’t remember that it closed in 1967 because I was going there in high school and graduated in 1969. My uncle was the manager at that time (Horace (Jr) Wilson. He just recently passed away. My boyfriend in the 60’s (accidentially) pulled off with a speaker still attached to the window and still have that speaker. It is a treasure to me. So many memories.

Great story about your boyfriend, skyhuggs! I’ve sent you an e-mail about the South Side. Thank you, again.

When this drive-in was closed and demolished, another Southside Drive-in was built on Old Hemphill Rd.—-which was later twinned.

This opened on September 24th, 1949. Grand opening ad in the photo section.