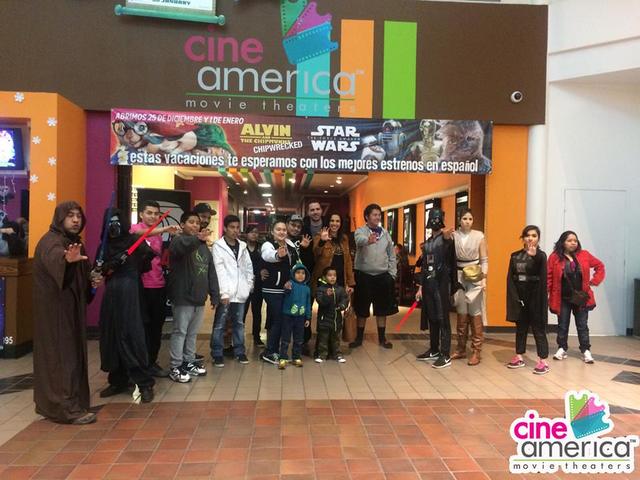 Opened on August 19, 1987 as the General Cinema Town Center Cinema 8. It was later taken over by Wallace Theaters followed by Hollywood Theaters. Last operated as Cinema Latino de Fort Worth by Cine America, it catered for a Spanish speaking audience and was closed in December 2014. It was reopened August 14, 2015 as the Ft. Worth La Gran Plaza.

In June of 1960, Sears not only decided to build its first retail store within Fort Worth, it created an entire subsidiary called Homart Development to construct shopping centers, the first of which was Seminary South Shopping Center on an 88-acre tract opening in 1962. In 1969, General Cinemas decided the time was right to construct two theaters simultaneously adjoining shopping centers. They were the Seminary South Center I & II in the Homart plaza and the Six Flags Cinema I & II in nearby Arlington, TX, a project that had delays opening in August of 1970. General Cinemas also opened in Homart’s other properties in DFW: inside of Valley View Mall in Dallas, outside of what would eventually be called the Parks Mall in Arlington, outside of the Town East Mall in Mesquite.

The GCC Seminary officially opened on Christmas Day 1969 and would expand in the 1970s to three screens as auditorium two was twinned. The location had an art gallery and a smokers area like many of the other theaters of that era. The Seminary South struggled due to competition from new enclosed malls in Fort Worth, Arlington, and North Richland Hills. Locals disparagingly referred to the area as “Cemetery South” as the center shed stores and hurt General Cinema’s revenues. But there was hope for General Cinema.

In 1985, Homart finally sold the underachieving shopping center to the Texas Centers Association which spent $25 million to purchase the property and another $25 million to convert the open air shopping center to an enclosed mall designed by Altoon and Porter, architects from California. The architects had a spot for GCC on the second floor right by one of the mall’s main entry points on the East side just up the escalator. The mall project finally opened on September 4th, 1987 as the Town Center Fort Worth with great optimism. Not long thereafter, General Cinema completed work on its new GCC Town Center 8 which opened and the chain closed its exterior Seminary South I, II, III. An attraction sign was visible from both the adjoining Interstate highway and access road heading southbound.

But ominously, Black Monday occurred October 19, 1987 and the economy regressed tremendously hurting low-to-middle class malls such as the Town Center. Within five years, the mall lost its first anchor in J.C. Penney’s which reported absurdly low revenue receipt totals. Many stores between also closed and even the mall’s original anchor grocery store went out of business. Town Center would regress to “greyfield” status, an industry term akin to a “dead mall” within just ten years of its opening. For General Cinema, which was about to get slaughtered by a new breed of megaplexes, there was no reason to continue operating the underachieving Town Center 8. On January 19, 1992, GCC pulled the plug prior to completing its fifth year.

Three other chains tried to rebrand the theater as a discount house which seemed reasonable given the mall’s remaining clientele. First up in 1992 was Trans-Texas calling the theater the Town Center Dollar Cinema 8 and running it as a sub-run operation. After they failed, next up were the Hollywood circuit and the Wallace circuit. Wallace even offered free seats to any TCU student from the nearby University to get anyone to show up for a period of time. But even the attraction of free seats in a ghost town mall, a theater in disrepair, presentations consisting of scratchy 35mm prints, and a wide variety of insects running freely up and down the aisles was not a good draw as the theater was mercifully shuttered in March of 2003. Only a miracle could save the cinema if not the entire complex from the wrecking ball.

José de Jesus Legaspi was the miracle worker transforming the moribund “Cemetery South” / “Town Sucker Mall” to La Gran Plaza, a vibrant Hispanic mall built with an intriguing tax rebate incentive deal allowing the project to flourish. The Mexican villa concept and business plan was visionary. And an important component from the outset was reviving the Town Center 8. Rebranded by Cinema Latino circuit with a May 1, 2003 grand opening as Cinema Latino de Fort Worth, the theater finally found its audience almost twenty years after its original opening when the mall relaunched as La Gran Plaza in 2005.

Cinema Latino de Fort Worth played first-run, mostly American films with Spanish subtitles; dubbed American films into Spanish (primarily animated and effects-centered action films); and some Mexican films that played exclusively at the theater. Cinema Latino also played all of the Pantelion releases from the studio created by Lionsgate and Grupo Televisa to reach American Hispanic audiences. The theater had big successes with Pantelion titles including “…instructions not included,” “From Prada to Nada” and “Pulling Strings.” By the 2010s, the circuit still was operating theaters in the Phoenix area, the Houston area, and the Denver area as well as its Fort Worth location. Given the state of the Town Center, few could have predicted that this multiplex could possibly have survived past its 25th anniversary, especially in a megaplex world. But as Bruce Willis said in the dubbed Die Hard, “¿Quién diría?” Who knew?

But, sadly, the Cinema Latino couldn’t come up with a lease renewal and the theater closed in December 22, 2014. The mall hoped to find a sixth operator for the multiplex as of 2015.

Reopened as Cine America on August 14, 2015 with digital projection on all screens. Its feature selections are first-run, mostly American films with Spanish subtitles; dubbed American films into Spanish (primarily animated and effects-centered action films); and some Mexican films that played exclusively at the theater. Like its predecessor, Cinema America also played all of the Pantelion releases from the studio created by Lionsgate and Grupo Televisa to reach American Hispanic audiences.

I was the GM of this theater for Trans-Texas Amusements from May of 92 until February of 93. The last GM for GCC was hired on as the first GM for Trans-Texas. He was Todd Hecht. Whom I believe is the current GM for a theater in Burleson. I worked as a trainee here the opening weekend for Trans-Texas. They figured that since I had just come from GCC in Dallas that this was a good place to learn their system. When I left my final day Todd joked that I’d probably be back as GM. Surprise; he was right. Tod only lasted a couple of months and was replaced by someone that had worked there a long time. As a box office cashier. She had been his Assistant for two months. When I took over at the end of May, this theater was so screwed up and had several employees stealing. The previous GM couldn’t even do a proper inventory to figure out how much had been stolen. This theater didn’t fail due to lack of business. During my time here it was very busy. And on $.50 Tuesdays we always broke 4000 in attendance. The problem was three things. The people that came here didn’t hardly buy anything at the concession stand. And on Tuesdays they only showed up with their $.50. The weekend in February that I worked had alot of attendance of college students from TCU just North of us. As GM there were no more college students coming here. Todd had stopped by my first weekend to see how things were going and he filled me in. All of their customers from the GCC days slowly stopped coming after the changeover. And all of the very poor people that lived in the area started coming. And they would come in and watch their movie and leave without buying anything. Second, This theater was located in the most dangerous part of Ft Worth. I was told by the local police that I hired as security that the shopping center was on the boundary between two big local gangs. And as a result we were constantly having problems. The police were constantly pulling people out of the auditoriums for disrupting movies. And our video games got broken into so many times that I finally got the OK to have them removed. We were even featured on an episode of “Cops”. We also had a gang shootout inside the mall just a few doors down from us one weekend. It got to where the Ft Worth Police gang unit would stand outside the entrance to our theater inside the mall on the weekends. Third: When Todd came back he told me that he left due to a lack of support from the corporate office. And that they were always shorting his commission paycheck. Which is illegal by the way. And that’s what they did to me. At the time Trans-Texas had about a dozen theaters. and only two, mine and Burleson, that had GMs with prior theater experience. I learned later that the Burleson GM, a former GCC GM, quit the same week that I did. After I lost an Assistant Manager. They sent me a new one from another theater that they said was the best one they had ever seen. After a short while I discovered that he liked to take alot of breaks outside at his car. Where he kept bottles of Wild Turkey in his trunk. I had the pleasure of firing him. But he refused to leave. And I had to call my boss in Dallas and have him tell the guy where to go. I thought that I was going to have to have him arrested. I shortly found out that it was common knowledge in the company that this guy was bad news.

This opened on August 19th, 1987 as Town Center 8. Grand opening ad in the photo section.