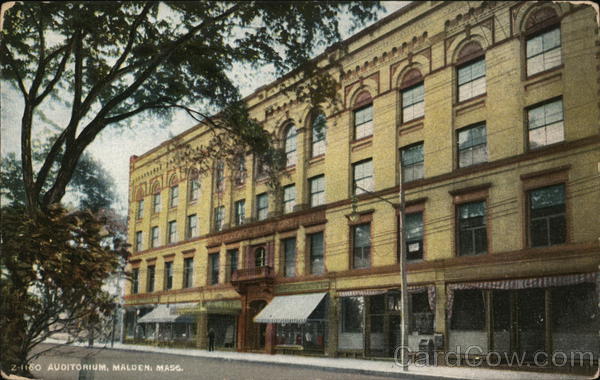 The Auditorium was one of seven movie theatres in Malden, a suburb just north of Boston. At one time it was operated by the Middlesex Amusement Co. (Ramsdell Brothers).

The Auditorium was included in the MGM Theatre Photograph and Report project. There is an external photo dated April 1941. The entrance was at the left end of an imposing commercial building at least 3 stories high. There was an elegant marquee with “Malden Auditorium” across the front. At the time, the Auditorium was temporarily closed. The Report states that the theatre is on Pleasant St. in Malden. It had been playing MGM product. It was over 15 years old, and was in Poor condition. It had 696 seats on the main floor and 441 seats in the balcony, total: 1,137 seats.

I don’t believe so. The name on top of the marquee in the linked photo looks like Granada to me.

Uploaded a postcard image of the Auditorium.