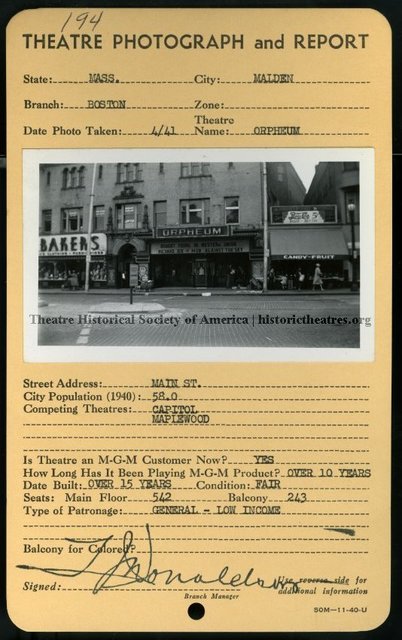 The Orpheum Theatre was one of six movie theatres in Malden run by the Middlesex Amusement Co. (Ramsdell Brothers). Further information welcomed.

The Orpheum in Malden MA was included in the MGM Theatre Photograph and Report project. There is an exterior photo dated April 1941. The entrance was on the right end of a large old brick commercial building at least 3 stories high. There was a sign reading “Orpheum” mounted just under the windows on the second floor and a one-line strip to post attractions running just above the wide entrance. There was a center ticket booth with sets of doors on each side. The Report states that the Orpheum has been presenting MGM films for over 10 years; that it’s over 15 years old; in Fair condition, and has 542 seats on the main floor and 243 balcony seats, total: 785 seats. The Orpheum is listed in the 1927 Film Daily Yearbook as being open 6 days per week and having 800 seats.

The Orpheum was on Main Street just across the street from the Malden Public Library and just around the corner from the Granada on Pleasant Street. Generally it showed features that had played at the Granada the week before. Going there in the ‘40s as a child and on through the '50s, the prices were lower than the other Malden theaters on Pleasant Street; the lowest I remember is the child’s admission of 12 cents. A unique feature of the Orpheaum was that upon entering at the street level one encountered the balcony! To the right of the candy concession were stairs leading down to the orchestra level. Couldn’t begin to count the times I went to this theater, first with my mother and then on my own. Scrounging for soda and milk bottles that were returnable for two cents, or even five cents, got admission and possibly some penny candy !

I stand corrected (only slightly). After looking more closely at the picture, it is the First Baptist Church which is on Main Street across from where the Orpheum stood, and the library is at 36 Salem St. Malden, MA 02148 next door to the church. It is of the same stone construction as the church, hence my confusion !!!