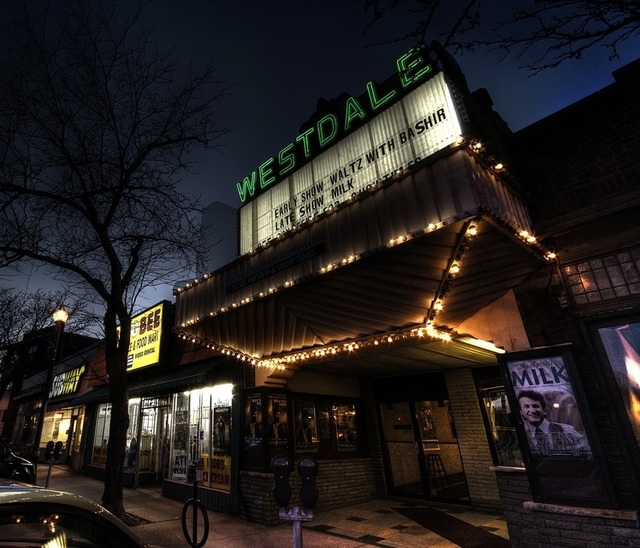 Opened in 1935, the Westdale Theatre is the only single screen theatre left in Hamilton.

The theatre was renovated in 1979 and showed mainstream and art films. The theatre’s claim to fame is that the film, “Blood Sport” was filmed here in the 1980’s.

It was listed for sale in December 2016 and purchased for $1.8m in February 2017 by the newly formed, Westdale Cinema Group. It was closed for a full renovation on May 28, 2017. Renovations were expected to cost $1.m and the group does intend to keep it running as a cinema, as well as using it for lectures, live performances, and other events. The Westdale Theatre was reopened on February 14, 2019.

Great neighbourhood theatre. A staple in the Westdale area. This theatre always shows very “artsy” movies, and is very sucessful in that.

This is a recent picture interior of the Westdale theatre. A place have seen many a film in…

Looking for vintage photos that would be good for wedding invitation and programs.

My grandfather was George Stroud of the old Palace Theater and, I think, the Star. Does anyone here know more about him? My contact info is Any info about the theater that he ran or other info about him would be appreciated. Thanks. A link to a picture of the theater would be good as well.

Susan — I have lots of information about your grandfather. He owned and operated important theatres such as the Capitol and Palace and Savoy Theatres in Hamilton. He was an operating partner of Famous Players Canadian Corporation through a stock-holding company called Hamilton United Theatres Limited. He owned most of the shares. Famous Players would choose the movies and provide the advertising and the profits would be split between Mr. Stroud and Famous Players in EQUAL shares. That is how these agreements were written.One of my senior bosses actually worked for THE GEORGE STROUD ESTATE after his passing in the thirties. The Savoy Theatre was more of a legitimate theatre than a movie theatre and they hosted many big-time live stars of vaudeville. The famous comedy team of Olsen and Johnson appeared at the Savoy for a week — if you want to see them in action do a youtube search for Olsen and Johnson re their movie HELLZAPOPPIN. They were zany on and off the stage. The story I was given by old-timers at Famous Players is that about 1940 or 1941 these very important theatres were sold to the original Odeon chain and the only notification these theatres received was a letter in the mail telling them to mail their reports to a new address. The other people with more exact knowledge of this situation have all passed away many many years ago, so that is all the information I can give you. Mr. Stroud would have been an extremely wealthy man because these theatres were extremely busy first-rate situations in a major Canadian city!!

Susan If you want to talk to me, I would be glad to. I have a government report that the Federal Canadian government wrote on Famous Players in 1931 detailing how Famous Players obtained a virtual monopoly in Canadian movie exhibition. Your grandfather’s name I believe is mentioned as all the contracts with associates like your grandfather are explained in detail. My g-mail address is

The Capitol and Palace Theatres were large single auditoriums designed by architect Thomas Lamb in the old-fashioned style.They were beautiful theatres, tastefully designed and appointed. These theatres were quite large and each sat approximately 2,000 people, approximately. During the twenties and thirties these theatres would feature live acts such as singers, dancers and comedians in addition to the big-time movies featured on their huge screens.

DavidDymond, sorry, just found your replies. I sent an email. Would like to hear more. Susan

As of now, the Westdale is officially closed for renovations with plans to reopen in the spring of 2018.

“Hollywood film producer and Dundas resident Fred Fuchs and Hamilton heritage guy Graham Crawford are part of the Westdale Cinema Group looking forward to bringing the theatre back to life.

‘We’re going to put in a small stage so we can have a small live performance, a chamber orchestra, lectures, other kinds of events.’

Their goal is to create a state-of-the-art space, a cultural and economic hub for Westdale Village and the city.

‘We think it is going to take us between 8 and 12 months because so much has to be repaired or upgraded.’

It’s the first time in its history it’s been closed."

Fred Fuchs was also quoted as saying, “When we’re finished, this will be a state-of-the-art, best cinema experience, perhaps not just in Hamilton, but all of southern Ontario.”

Update: Graham Crawford spoke before a screening of “The Trip to Spain” at the Lincoln Alexander Centre on October 17. He confirmed that the Westdale Theatre will have its grand opening on July 1, 2018. He also stated that the theatre will undergo a full restoration, not just renovations.