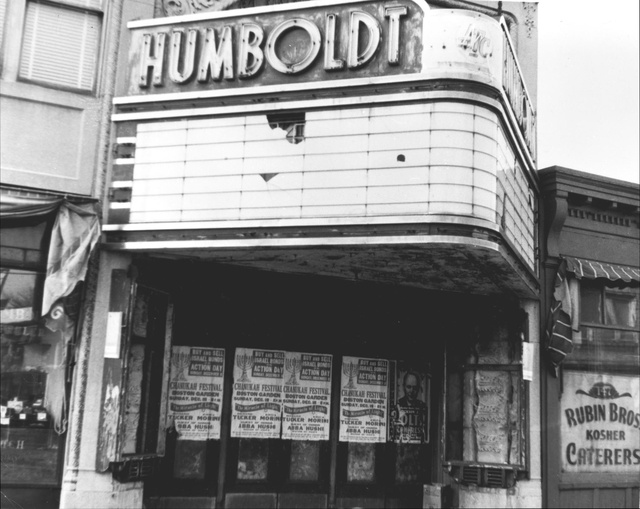 The MGM Theatre Photograph and Report form for the Humboldt Theatre has an exterior photo dated May 1941. The theatre entrance was at the right end of a 2-story commercial building. There was a modern triangular marquee with an arch above. Attractions are Gary Cooper in “Lives of a Bengal Lancer” plus “Meet the Chump”. The Report states that the Humboldt is at 147 Humboldt Ave. in Roxbury, that it has been showing MGM films for over 10 years; is over 15 years old and in Fair condition, and has 800 seats on the main floor and 500 balcony seats, total: 1,300 seats. It’s listed as a “Neighborhood” theatre.

It looks like there were storefront stores along Humbolt ave, with the entrance at one end. The theater itself was set behind the Humbolt ave buildings, with the stage end of the building fronting on Waumbeck st around the corner. The site now is open, and beside the Trotter school, which I believe was built in about 1970. I went to Boston Tech at the time nearby, and I don’t recall seeing the theater.

My copy (a Xerox) of the May 1941 photo on the MGM Theatre Report is very poor but it shows a long 2-story building with the Humboldt Theatre entrance at the right end, and at least 5 shops in a row to the left of the entrance. The building next door to the right has only one-story store fronts. It appears that you bought a ticket then went inside and turned left to face the screen.

According to the Northeastern University digital collection, this photo dates from 1949. It’s sort of hard to tell whether the theater is even operating or not…the marquee is blank and appears to be in poor repair, the poster display cases are empty, and the whole entrance looks decrepit. Does anyone know when this theater closed?

The Humboldt appears to be in derelict condition and closed in the photo. It definitely is the same theater as pictured in 1941 on the MGM Theatre Report. In this photo, there appears to be the “ATC” logo on the apex of the marquee. (American Theatres Corp., a spin-off from M&P Theatres.) I looked under ATC theaters in a Nov. 1951 Boston newspaper theater page which I have and the Humboldt was not listed. This suggests that the 1949 date on the photo is correct. But I don’t know for sure when it closed.

I read somewhere that M&P went down the tubes in large part as a result of the 1948 Supreme Court decision in the Paramount antitrust case, because the breaking-up of the Paramount monopoly deprived many theater chains associated with the Paramount empire of guaranteed access to first-run films. The cost of films charged to theaters by the studios also increased considerably. Possibly it was no longer cost-effective to run some neighborhood theaters, especially with television beginning to pose a threat at this time. Still, the area in which the Humboldt was located was still thriving economically, not yet having undergone the cataclysmic demographic upheaval of the 1950-1960 period, so I’m a little surprised it closed so early.