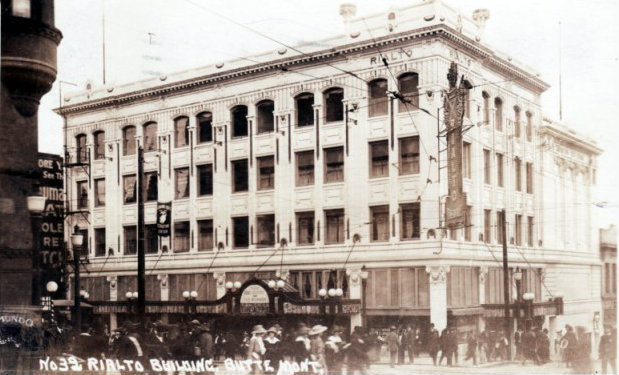 The Rialto Theater designed by architect Henderson Ryan for Claude Jensen and John Von Herberg, opened in May of 1917. The building was closed in the late-1950’s, but reopened in 1962. It was demolished in the 1960’s and replaced by a bank.

A 1917 article from Pacific Builder and Engineer (Barnes, Horace. “Patented Ramp in Liberty Theatre Seattle.” Pacific Builder and Engineer, April 27, 1917, p. 16.) states that Jensen and Von Herberg were the “lessees” of the theatre and that Seattle architect Henderson Ryan was the designer using his patented ramp design. Stylistically, the Rialto is very similar to the Liberty Theatre. Ryan was also working on Butte’s Peoples Theatre and another unknown theatre in Helena at the time. The Neptune Theatre (1921) in Seattle, also by Ryan, looks like a stripped down version of the Rialto.

The Rialto in Butte MT, where the theater had the local fire department do a full appearance to advertise a fire-department related movie called “The Still Alarm”.