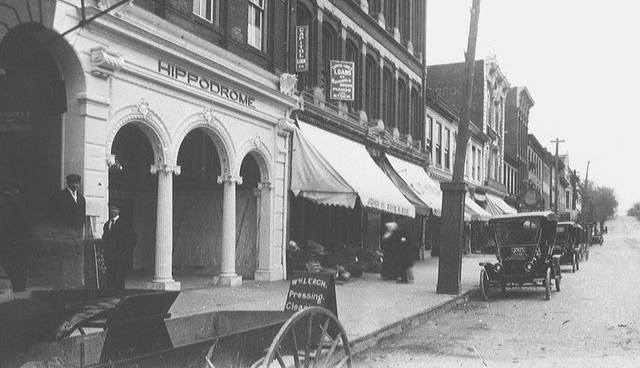 The Hippodrome Theatre was opened prior to 1906. It became the Liberty Theatre on May 5, 1934 and operated to the 1950’s. It was being used as office space by AEP Fuel Supply a few years ago.

Are you sure of the name? I don’t recall the Liberty. I do recall the Lyric,at 141 W. Main St. in Lancaster. Could this be the theater you are referring to?

The Liberty was originally called The Hippodrome. I’m not sure when it was renamed. but it remained The Liberty until the mid 1950’s. Around 1955, the third floor was removed and the building was converted into a Sears store.

The Liberty was a narrow theatre with support columns at the back center of the auditorium. I’ve been told that you had to sit in a specific place to avoid the columns blocking your site lines. The Liberty was home to second and third run films, but most notably it was the place to see “B” westerns and serials.

There is virtually no trace of the Liberty left. If you look at the building, the entrance was beneath the three far right windows.

The Arcadia Publishing Company’s book “Lancaster” has a 1906 photo of this theater as the Hippodrome. An earlier page has a later photo giving a partial view of the Liberty Theatre marquee.

This house was called the Hippodrome at least as late as 1913, when it was mentioned in the February 15 issue of Motography. Its operator, H. A. Wachter, was one of two Lancaster exhibitors who had attended a convention in Columbus. The other was George L. Law, who ran two movie houses called the Exhibit Theatre, one in Lancaster and the other in Portsmouth, Ohio.

Closed as Hippodrome on April 29th, 1934 according to this:

This reopened as Liberty on May 5th, 1934. Grand opening ad in the photo section.

Street view is currently set too far to the right. Historic photos of the Hippodrome/Liberty show its entrance in the rightmost bay of the once-three story, now two story building housing J.K. Jones Financial Network. Here is a photo from the 1950s.