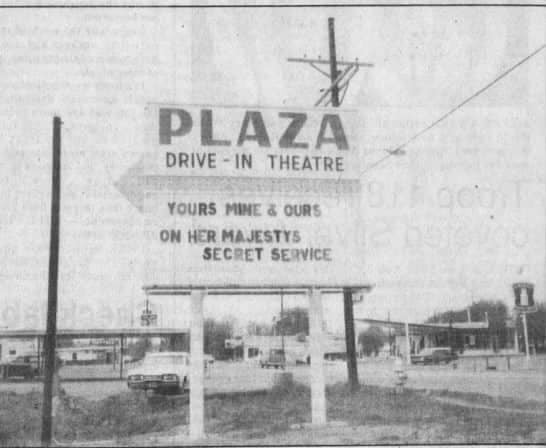 Lancaster, Ohio’s, City Drive-In opened on August 28, 1952, screening the 1951 crime drama “The Racket” with Robert Mitchum, Lizabeth Scott and Robert Ryan. Also featured was a cartoon. It was opened by Frank X. Rauch, Jr. and Frank Nolan dba Lancaster Auto Theatre Corp. They chose the name because at the time they claimed it was “one of the few drive-in theaters in the U.S., which was located entirely within a city’s limits.” Rauch and Nolan also own the Valley Drive-In at Athens, Ohio, Town and Country at Coalton, Ohio and the Trail Drive-In at Ashland, Ky. The Strong Electric Co. of Toledo, Ohio provided the Mighty-90 projection lamps, with the sound equipment and in-a-car speakers being furnished by Western Electric. The new airer featured bottle warmers for babies and along with patio seating with 200 grandstand type seats for walk in patrons. Rauch and Nolan brought the manager of their Trail Drive-In, from Ashland, Ky. Alton “Bill” Way, to manage the new drive-in. He was followed by William Dennis, Clyde Willard among others. In March of 1956, the City Drive-In was sold to J.J. Shinbach dba Lan-View Corp and Monarch Theatres I believe. Shinbach also owned the Intown Drive-In Theatre in Whitehall, Ohio. On June 28, 1957, Lancaster had a torrential rain and wind and storm that moved throughout the area which took out part of the screen tower. It was the remnants from Hurricane Audrey that came ashore in Louisiana.

The drive-in reopened on August 10, 1957. On May 15, 1961, Shinbach announced that the theatre has a new manager, Dave Miller who was the assistant manager before. Also the drive-in was getting new a $15,000 steel screen tower. In April of 1970, the City Drive-In was sold to Ben Cohen dba Holiday Amusement Co. from Hamilton, Ohio and renamed to the Plaza Drive-In. At this time Holiday Amusements owns 16 theatres in Ohio, Kentucky and Florida with most of them being drive-in theatres. The Plaza Drive-In reopened on April 8, 1970. The entire theatre was renovated with a new paint job, new equipment in the concession stand, new RCA in-a-car speakers and a new marquee. James McGrady who took over management of the drive-in, in 1966 will continue as the theatres local manager. McGrady said in 2013 interview “The theater chain’s management policy to change the movie selection from family-oriented movies to X-rated movies was the main reason for the for the Plaza’s decline.” Later on Joanne Cohen, now president of Holiday Amusements Co. closed the drive-in on August 1, 1988 with Bruce Willis in “Die Hard” & Goldie Hawn in “Overboard”. She is quoted as saying, “We want to get out of the drive-in business”. The Plaza Drive-In was demolished in 1992 and is now just an empty field.