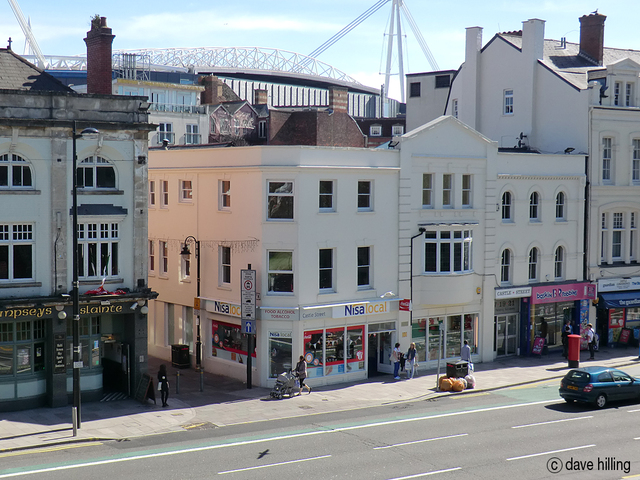 A few features remain which reveal the early days of this building (now a camping store) as a cinema which opened on or just after 20th November 1913 and closed in 1921. It was reopened as the Regent Cinema in December 1923, but this closed in early-1924.

The first radio broadcasts in the area were made from part of the same building, and the auditorium was converted into a garage circa 1930.

Recently altered to a convenience store and less of the interior is now accessible. Streetview image needs updating, the auditorium building can be seen from Westgate Street through the car park at the rear of the Angel Hotel. The remaining frontage on Castle Street and the side of the building in Womanby Street, altered for use as a garage in the 1920’s are still visible. Original plans can be seen at the Glamorgan Archive.

Recent changes of use include the use of the former auditorium as a location for small traders, accessed from Womanby Street.Very few traces of the cinema use remain,almost 100 years later,and an auctioneer’s leaflet dated 1923 has been traced which preceded the conversion to a garage (for which plans also survive).Another set of plans reveals a project to rebuild the Castle Cinema on a grand scale which did not take place ,at around the same time as the Capitol, a few minutes walk away, was being constructed.

A mention in the Bioscope trade magazine led to the discovery that this cinema was re-opened as the “Regent” in December 1923 by the owner of the nearby Hippodrome. Advertising a new name, new methods,new machines and new prices in the local newspaper.However, advertising had ceased within a few months and the conversion into a garage took place some time afterwards.Some further investigation of local press archives,directories etc needed to confirm details, and it is not known whether the reopening lasted long enough to merit an update in the KYB for 1924.The “Regent” name was in use a short time later at the newly built cinema in the district of Ely,opened near the end of the silent era.