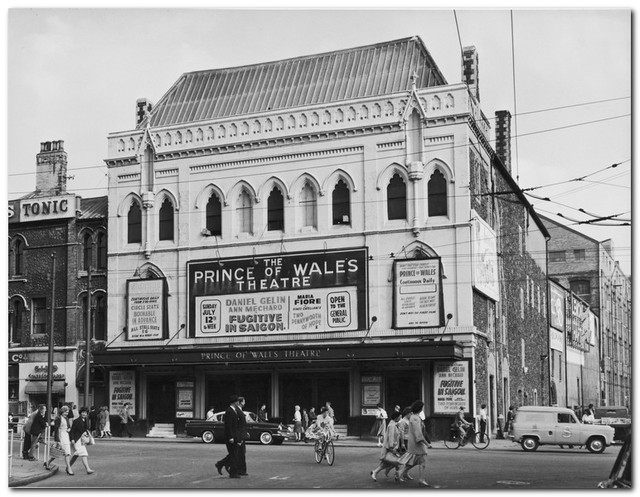 Built on the site of St Mary’s Church. The 19th century theatre on the site was redesigned on at least two occasions. Following a fire in 1877 it was rebuilt to the designs of Waring Son and W.D. Blessey. It had two entrances, the main entrance in a Gothic style is on Wood Street with a secondary set of entrances on St. Mary Lane at the rear, which has a rose window on its façade which has the outline of a church picked out in stone (hinting at the previous occupant of the site, St Marys Church). In 1920 the interior was re-constructed to the designs of the architectural firm Willmott and Smith and an additional entrance was created in a former shop unit on St Mary Street. It had a façade in a Gothic style, to match the main entrance around the corner on Wood Street. It had a seating capacity of 1,000 and it was re-named the Playhouse Theatre, which closed in 1925.

Re-opened in 1927, alterations were carried out to the designs of architect William S. Wort. The entrance on St Mary Street had its Gothic style façade re-done in a Greek Revival style. It was still named the Playhouse Theatre in the early-1930’s but was later re-named the Prince of Wales Theatre and . It offered live theatre use until 1957 when film shows were introduced. At first the programmes were subtitled or "art" films then re-releases.
For a time in the early-1960’s popular films were shown and when most of the circuit cinemas were occupied with "road-shows" there were a few "first runs".

Most locals remember the Prince of Wales for the subsequent period when the programmes were exclusively ‘X certificate products from Soho, London. The cinema closed on 30th June 1984 with the double bill;“Alexandra, Queen of Sex” and “Boys and Girls Together”.

Bingo was tried for a time and then it was converted into Caesar’s Nightclub which didn’t last long and the building eventually closed. It suffered badly during further short-term uses as a bargain store and a laser-game venue.

The J.D.Wetherspoon pub company took over and re-opened it as one of their chain of pubs in July 1999. The company carried out a very sympathetic restoration which gives some idea of how the Theatre looked following the 1920 redecoration.

The building is Grade II Listed.

Has nobody noticed that on the side wall of the outside of this building there is, picked out in stone, the outline of a church said to commeramate that this theatre was built on the site of St Marys Church.

Apologies, the link posted on the 17 Aug 2007 is incorrect, here is the correct one, which I think shows the details mentioned in the previous post:–

Although no longer a cinema or theatre this venue is now a popular Weterspoons pub. The chain has restored some of the glory once seen when entering the auditorium for film shows.

The former circle is in use for drinking and dining as is the stalls. The stage forms a second bar area and several private balcony boxes have been restored. It really is impressive and splendid and a showcase for the pub chain.

Lovers of old cinemas can sit with a pint for an hour or so and clearly see how splendid the auditorium would have been.

I’ve uploaded a couple of pictures of this theatre, I was very keen to go inside as I once visited it when it was still a cinema. It was in 1962, my pal & I saw “Voyage To The Bottom Of The Sea” I think it was then a second run picturehouse. I think the film starred Walter Pidgeon & Peter Lorre, then ageing stars.

Late to this party. Founfd the site whilst doing some family history reseach looking at The Prince of Wales Cardiff. Out of interest, my father (now long deceased) owned the Prince of Wales from the mid 1950s to about 1961. I was 9 then. We were Londoners and it would have been him that introduced the “art-house” period as he was French and spoke fluent Spanish and Italian too and had a film distribution business in London at the time. He employed local manager(s) and we made regular visits. I went a number of times as a kid. 2 highlights. Most vivid for me was meeting a pretty 12-year old Jane Asher, playing a Panto Alice (Through the Looking glass I think) in 1958 and presenting her with a huge box of chocs backstage after the show. I was 6! That would have been one of the last times the screen was raised to revert it to a full theatre use. In 1960 he put on The Alamo in the school holidays and that was a great success. I believe he sold his interest soon after that time. The cinema seems to have gone downhill after that, together with most of the old independents with the advent of TV and esp colour TV at the time.

Hi all, I hope this is okay to post but I’m currently writing a feature looking at all the different uses for the Prince of Wales. I’m looking to speak to someone who remembers going there when it was a cinema, would anyone be able to help me? Thanks in advance!

To correct the information above, which an article in Wetherspoons' magazine has used as its source, the original Theatre Royal( destroyed by fire ) was on a different site, in Crockherbtown,(which became part of Queen Street) the Park Hotel and Hall (later a cinema) was built shortly afterwards in the area. The New Theatre Royal, and the Philharmonic Hall were built on adjacent sites at Wood Street/St Mary Street and some external features dating from the late 1870’s are still included in recent refurbishment of both buildings.

Did the Prince of Wales ever go to this theatre?

I’m in Philadelphia, and on vacation last month, visited Cardiff for the 1st time. I’ve posted photos of the facades & the refurbished former auditorium of the Prince of Wales. Great job, Weatherspoon!This place stands as a loving tribute to the live theater and cinema that it used to be, and serves current customers just fine.