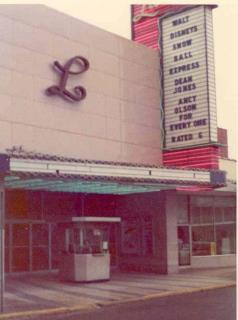 The Lamar Theatre was operated by independent operator, John Williams, who also operated the State Theatre located on Capitol Street. It was designed by E. L. Malvaney of Malvaney & Associates, which was a prominent architectural firm in Jackson.

The Lamar Theatre opened June 9, 1949 and cost $250,000. The theatre was located on the southwest corner of North Lamar Street and East Amite Street. The Lamar Theatre immediately took its place alongside the Paramount Theatre as the “grandest of Mississippi theatres”.

For decades it was the showed exclusively movies from M-G-M, Warner Brothers, United Artists, and Disney. With the Paramount Theatre playing the other film companies, it is not hard to see that the Lamar Theatre was a favorite of many in Jackson.

The Lamar Theatre was a very successful theatre until the early-1970’s. With the opening of three new suburban theatres and downtown changing from the place to be at night to only daytime offices, bad fortune fell upon the theatre and it closed in 1976. It was turned into a nightclub in 1977 and operated as such until 1979. The theatre was demolished in 1982 for an office building; at least it was not for a parking lot.

Anyone that lived in the surrounding Jackson area in the 1950’s and 1960’s will remember the sold out Saturday afternoons watching the latest Disney flick, whether it was a reissue of “Bambi”, the original release of “101 Dalmatians”, or a double feature of “The Shaggy Dog” and “The Absent-Minded Professor”.

The June 18, 1949, issue of Boxoffice Magazine said that the Lamar Theatre had held its formal opening on June 9 that year. The item also said that the marine-themed murals decorating the interior were the work of local artist Karl Wolfe.

Another item about the Lamar in the July 2, 1949, issue of Boxoffice inexplicably calls it the Lanmar Theatre throughout.

Is there anywhere I can view pics of Interior lobbies of JACKSON, MS Paramount or Lamar theaters?