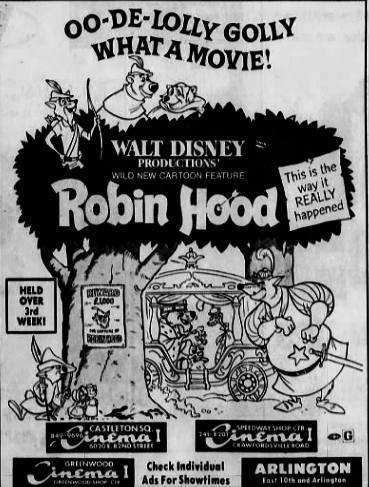 This theatre was in the corner of the parking lot behind the mall. It opened as a triple on December 21, 1973, but on October 19, 1979 the largest screen was split making it a four-plex. It had a small lobby but did good business. It had the old globe ball lights which I think were from the beginning and weren’t replaced until 1988-1990. it was closed on March 23, 2000.

The open-air Greenwood Shopping Center had opened theatre-less with anchors Sears and A.S. Ayres along with an MCL Cafeteria and a Kroger grocery store in 1965. The Greenwood Shopping center was said to have been the tail end of a trend of open air malls including St. Louis' Northwest Plaza that were largely replaced over the next ten to twenty years with enclosed malls. In fact both of these 1965 projects became enclosed malls.

The General Cinema Greenwood Cinema I-II-III opened in the Greenwood Shopping Center on December 21, 1973 with “Robin Hood,” “The Seven Ups,” and “Ash Wednesday.” Theatre I had 632 seats, Theatre II had 334 and Theatre III had 281 seats for a total of 1,247 seats. The theatre was freestanding in the Northeast area of the center.

General Cinema decided to take a portion of the interior mall to create its latest triplex, the Greenwood Park Cinema V-VI-VII opening on June 5, 1981. That theatre closed as the Greenwood Plaza Cinema 5-7 (roman numerals had been dropped) on April 11, 1999 with General Cinema in major economic trouble.

In January of 2000, GCC showed some spunk building a 14-screen megaplex at Greenwood Park Mall - its only effort at stadium seating in town - to replace its aging interior quad. The GCC Greenwood Park 1-4 closed on March 23, 2000. The next day, the new megaplex opened and seven months later, GCC declared bankruptcy.