Route 31 and Frye Road,
Greenwood, IN 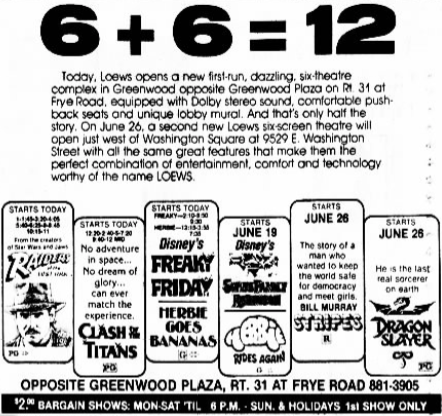 The Loews Greenwood was located on Route 31 at Frye Road, exactly a block away from the Greenwood Park Mall where General Cinema’s Greenwood Park’s 1-4 and 5-7 sit along.

Fun fact about the Loews Greenwood is the opening date, which opened exactly a week after the Greenwood Park 5-7 opened. The Loews Greenwood opened as a six screen theatre on June 12, 1981 with the following in screen number order: “Raiders of the Lost Ark”, “Clash of the Titans”, “Freaky Friday” and “Herbie Goes Bananas”, “Swiss Family Robinson” and “Herbie Rides Again”, “Stripes”, and “Dragon Slayer”. Three more screens were additionally added in 1990, bringing it a total of nine screens.

Loews operated the theatre for the next 13½ years, although it was still listed as a Loews theatre after the company literally rebranded into Sony Theatres. But on January 1, 1995, the Loews Greenwood became part of the Sony Theatres chain, renaming the Sony Greenwood.

After returning back as a Loews theatre in 2000, it didn’t last very long from this Loews reboot due to its competition from the “brand-new” General Cinema Greenwood 14.

Now this is a very confusing statement. For a very short amount of time from the last week of March until the second week of April 2002, The Indianapolis Star listed the theatre as a General Cinema theatre before becoming an AMC theatre two weeks later. Yes it did. According to The Indianapolis Star, the General Cinema Greenwood Park 14 became an AMC theatre during the GCC stunt at the former Loews theatre. Due to GCC’s bankruptcy, both Greenwood theatres flipped the table to AMC. However, they were competing each other shortly afterward, but was immediately knocked out by the Greenwood Park 14. This forced the former Loews theatre to close for the final time in 2002.