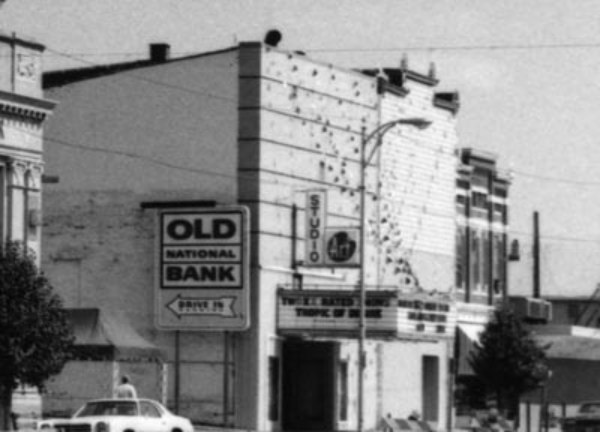 The West End Electric Palace was opened prior to 1906. The Los Angeles Times reported a fire in November 1906. Many panicky patrons, but little damage from the fire. It was renamed Franklin Street Theatre on June 12, 1912.

In 1983 it became an adult movie theatre renamed Studio Art Theatre. It was closed and demolished in 1994.

Name was changed to “Studio Art” at some point – it was a pornographic movie theater during the 70’s and 80’s.

This theater opened about 1908 as the West End Electric Palace, and was rebuilt as the Franklin Theatre in 1912. An advertisement for the house’s first anniversary as the Franklin can be seen on this web page.

This page at Historic Evansville says the theater was remodeled in 1941, became an adult theatre in 1983, and was demolished in 1994. That page has a link to several additional photos of the theater.

The 1941 remodeling of the Franklin Theatre might have been more a rebuilding. The April 25, 1941, issue of The Film Daily has this item:

“Evansville, Ind. — The Premier Naborhood [sic] Theaters, Jesse Fine, president, has awarded contracts for the construction of the new $50,000 Franklin Theater to be erected at 2113 West Franklin Ave.

“Construction will get under way at once.”The correct name of the architectural firm was Fowler & Legeman. Frank E. Fowler and Ralph E. Legeman were among Evansvilles leading Midcentury architects.

Was in the Franklin many times, pre-porno, and what a delightful art-deco masterpiece it was. I wish there were pictures somewhere of the interior from the 40s or 50s. This theater should have been saved, but it had such a negative stigma attached to it in its adult days, the city fathers wanted in down and gone. And it is. 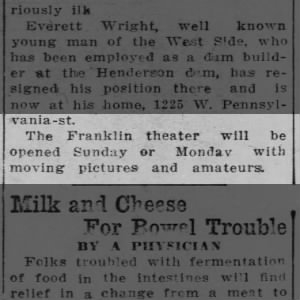 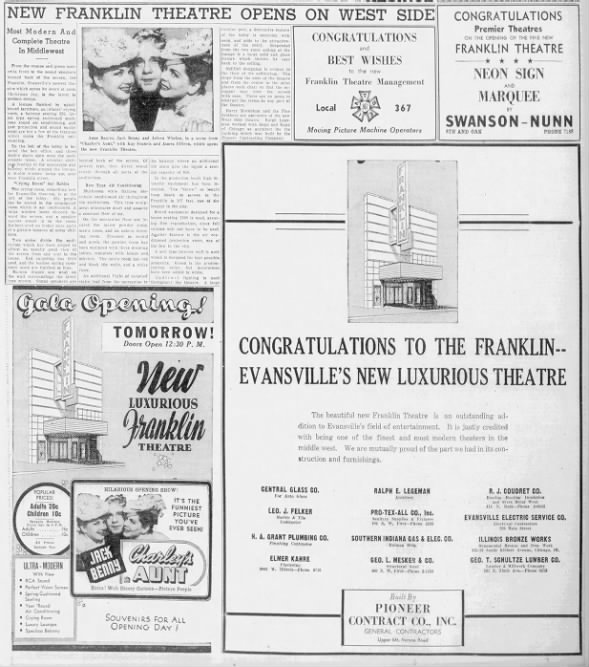 Reopened as Studio art on January 23rd, 1970. Another ad posted.