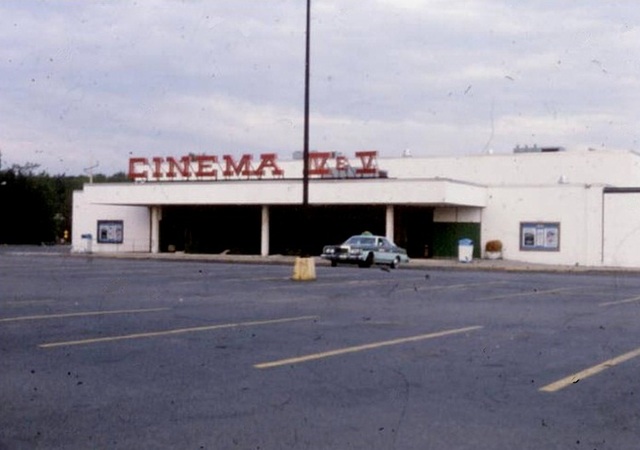 This opened as a twin screen by General Cinema on September 24, 1970. It was across the street from Glendale Mall on North Keystone Avenue.

It had a wide lobby. They split one screen along with one at Glendale 1-3 which also opened as a twin. The seating after they put in the new Irvin seats was 375 in cinemas 4 and 5 and 575 in cinema 6. It was closed in 1994

When the theatre closed in 1994, portions of the equipment transferred to other GC locations. The General Cinema logo sign on the front that faced Keystone, was moved to Lafayette Sq 1-2 and replaced the orginal 1968 sign on the side of that mall. It was removed from there in 1998.

The projection booth had a few extra parts that were styored there for years, so outdated. Oneof the projectionist that was there was Dick and he had one of the store rooms in the booth turned into his kitchen. It was called Dick’s Deli. He had for for a week or more because the projectionist weren’t allowed to leave the theatre until the shift was over so they brought or made their lunches. Sometimes they would have an employee pick up something for them.

Thisd theatre had nice size storage behind the screens. Cinema 6 had 2 store rooms one on each side and theatres 4 & 5 had one each which was all one before it was split. Although cinema 4 & 5 sort of had 2 because it had one small of that had a door to the other behind the screen. Cinema 6 sort of had 2 oine the left side but only had behind screen area past the storage.