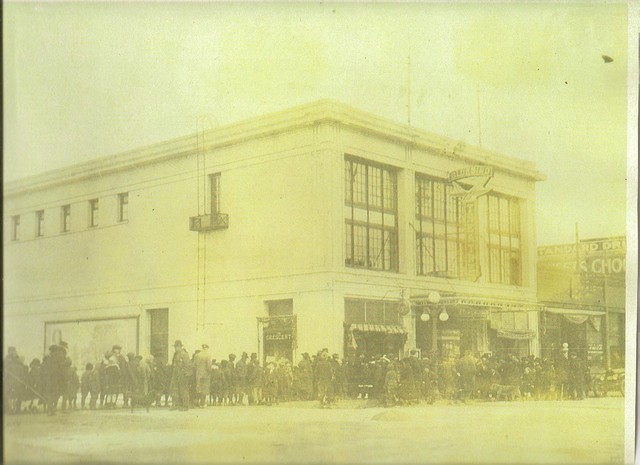 SMELTER CITY TO HAVE NEW THEATER

ANACONDA, Oct. 12.â€" The building formerly occupied by the Fuller Drug store at 415 East Park avenue Will be remodeled Into a modern theater, it was announced today by Joseph A. English, manager of the Washoe and Bluebird theaters here and purchaser of the East Park avenue building. Second-run pictures will be shown at the theater on its completion.

415 E. Park was the address of the third theater in Anaconda. The Bluebird must have had a different Park Avenue address.

In 1914 the Anaconda Standard was advertising shows at the Alcazar and the Grand. Jumping ahead to 1958, the Montana Standard advertised several theaters in the Anaconda area. They were the Washoe, the Center, the West Valley Drive-In, the Rustic Drive-In and the In and Out Drive-In. The West Valley was showing “Far Horizons” with Fred MacMurray and “Charles” Heston.

The local paper was advertising plays at the Margaret in 1912. They probably used it for movies later on, before it burned down.

I Have to get a couple of those FDYs eventually. I only see one listed in the LA Library catalog, from 1932.

Well guys, I don’t have a single shred of evidence—just my opinion. The small pink building (Fuller Drug Co.)just two away from the Pizza Hut has Art Deco simple neighborhood theater stamped on it. The unusual structure in the center of the archway looks as if it were the boxoffice or the lighting above the counter high center window with the doors on either side of the boxoffice. just a hunch since I have never been to Anaconda.

Judging the size of the building and the number of seats listed by KenRoe this could quite well be the Highland. The name may have been chiseled away if it was in relief since the name of the drug company appears to be painted. A marquee could have been attached where the horizontal scar line appears. Whatever, it appears to now be Anaconda Realty or for sale by them.