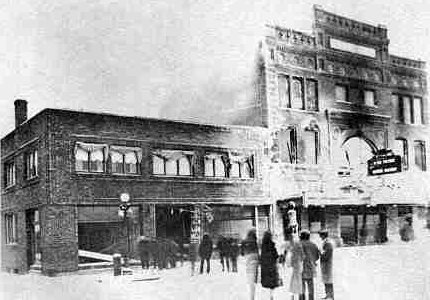 The Margaret Theater was built in 1897 and named after Marcus Daly’s wife. By June 1915 it was presenting Empress Vaudeville by Sullivan & Considine and one item on the bill was the Empresscope Motion Pictures. It was sold in 1926, re-modeled in 1929 at a cost of $60.000 and as the ill-fated Sundial Theater only to be destroyed by fire in the same year. The U.S. National Register of Historic Places, 1936, Art Deco, Washoe Theater (listed on CT) was built on the site of the Margaret Theater.

Anaconda, Montana: Copper Smelting Boom Town on the Western Frontier, by Patrick F. Morris, says that the Margaret Theatre was inaugurated on September 28, 1897. The Margaret Theatre is listed in the 1910-1911 Cahn guide as a ground-floor house with 1,246 seats. Frank Cullen’s Vaudeville, Old and New lists the Margaret as having been on the Ackerman & Harris vaudeville circuit, but there are numerous period references to the house presenting everything from road shows to prize fights.

There is one reference to an exhibition of movies at the Margaret as early 1905, but I haven’t found the house mentioned in the movie industry trade journals of the period. However, the January 10, 1930, issue of The Film Daily did have a brief item saying that the recently-burned Sundial Theatre would be replaced by a new house, so the Sundial must have operated as a movie theater during its brief life.

The term “Nuevo Deco” used to describe the Washoe Theatre in the introduction to this page is a Spanish phrase apparently describing a neo-vintage style that has recently gained popularity in Latin America. The Washoe is simply Art Deco, though at the time it was built it would probably have been described as Art Moderne or Zig-Zag Modern (the term Art Deco was coined by English critic Bevis Hillier in the 1960s.)

The majority of web sites using the term Nuevo Deco are, not surprisingly, in Spanish, although the term has made its way into that demotic fount of misinformation, Wikipedia, so I suppose we can expect it to soon metastasize across the Internet.