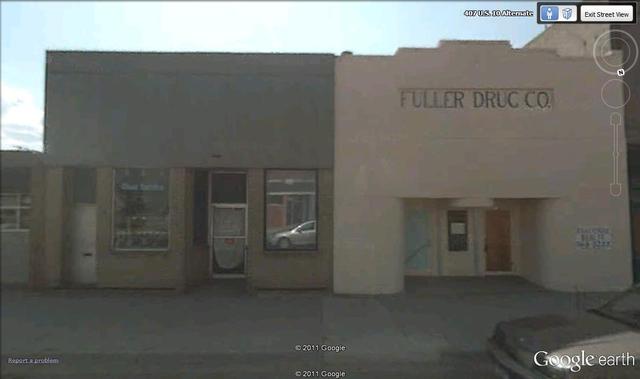 This is from the Montana Standard, 10/13/39. We believe this to be the Highland:

SMELTER CITY TO HAVE NEW THEATER

ANACONDA, Oct. 12.â€" The building formerly occupied by the Fuller Drug store at 415 East Park avenue Will be remodeled Into a modern theater, it was announced today by Joseph A. English, manager of the Washoe and Bluebird theaters here and purchaser of the East Park avenue building. Second-run pictures will be shown at the theater on its completion.

does anyone have any photos of the Highland?
Thanks

While I was snooping around on the street view for the Bluebird I discovered what just had to be a small simple art deco theater. That was before reading this page. Ken’s post confirms what I discovered but I got the usages of the building backwards. They did one fine job on the remodel since it looks like it was purpose built on the spot—the recessed entryway, the double doors on either side of a presumed box office window, the nice curved corners, and the stepped parapet (probably original). This building is two doors down from the Pizza Hut toward Chestnut. Fuller Drug Company is still very clear on the building. So hopefully mystery solved.

Snagged a street view picture from Google Earth—I hope it is ok to have posted it. The aerial view of this building shows that it is incredibly long compared to its width and height.

The Bluebird Theatre has the same address listed as this theatre. I think this is the correct address for the Highland Theatre but not for the Bluebird.