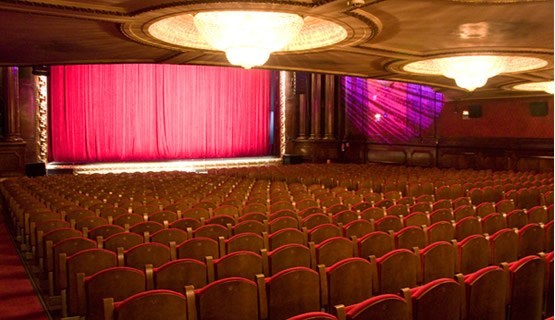 The Teatro Gran Via is located on the Calle Gran Via in central Madrid. The Gran Via was designed by architect Germain Alvarez Sotomayor and was built by an eccentric millionaire in the early-1940’s. It opened as a live theatre in 1944, but was converted into a full time cinema in 1949. The theatre’s old world elegance includes a dozen chandeliers - some are Bohemian crystal. The beautiful Neo-Classic style decoration in the auditorium also includes ornate plaster, impressive sconces and on the side walls what looks like woodwork. There is a large balcony.

On July 7, 1946, the Cine Gran Via hosted the Cinema Writers Circle Awards,
Spain.

In the early-1990’s, the Cine Gran Via was listed as having 1,121 seats as a single screen. When on October 15, 1998, I saw at the Cine Gran Via (Sala 1) "Frontera Sur" a movie about 19th Century Spanish immigrants to Argentina, the Guia del Ocio booklet stated that the main auditorium, Sala 1, had 774 seats. I counted on the main floor 20 rows of 14, aisle, 14 seats. There was a large balcony, too. A red curtain was opened & closed before the screen, which I estimated to be 40 feet wide for the flat film, but I which I figured would be 50 feet wide for ‘scope films. In addition to the description above, the beautiful decoration of this very elegant cinema also included murals. A separate auditorium, Sala 2 was listed as having 301 seats. Full price was 750 pesetas, discounted to 600 for seniors over 65, juveniles, and on Wednesdays. The Cine Gran Via was then operated by the same cinema chain that operated the Cine Rex and the Cine Capitol.

The Cine Gran Via has become the Teatro Cine Via, changing from movies to cultural performances, and include national international ballet troupes, flamenco, zarzuela. By 2017 it had been re-named Teatro de la Luz Phillips Gran Via. Sing-a-long movies are a popular feature of the programming.

The former Sala 2 is now named Pequeno Teatro Gran Via, and specialises in humorous plays & comedies.

Since theater websites change over time, I’m adding this to Comments instead of the Introduction:
A photo on the theater’s official website (click Entradas, then plano) shows the auditorium facing the large balcony and depicts a beautiful neoclassical auditorium with ornate plasterwork, lavish chandeliers and sconces.

Another photo on the official theater website (click at Proximamente) is vintage, with Walt Disney’s Cinderella, Technicolor on a theater marquee. I’m not sure if that marquee is the Gran Via.

As to my comment above, Ken Roe has suggested to me the following:
“ I donâ€™t think the vintage photo on their website is even Spanish. It would have the title â€˜Cinderellaâ€ in Spanish, not English and two other points I notice, there is a vertical sign in the centre distance for an â€˜Orpheumâ€™ which I donâ€™t think Madrid ever had, and the vertical sign of the theatre on the right has the word â€˜Theatreâ€™ not â€˜Teatroâ€™.”