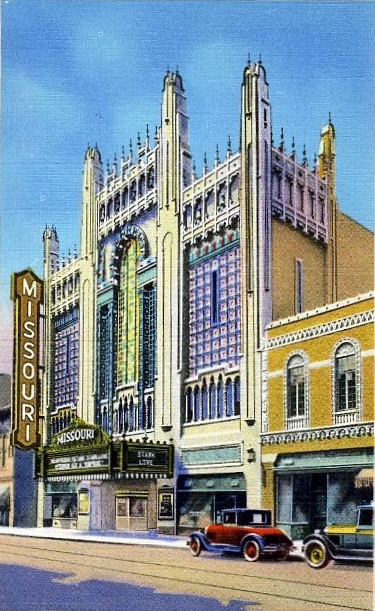 Opened by Publix Theatres on June 25, 1927 with Clara Bow in “Rough House Rosie”. The 1,391-seat Missouri Theatre was a first run movie palace for almost fifty years until film alone could no longer support the theatre’s cash flow requirements. The Missouri Theatre finally closed in the mid-1970’s.

The Town Hall Center was formed in 1976 to save the Missouri Theatre and took charge of managing the theatre for the city until 1979 – when management duties were transferred to the Performing Arts Association. The Missouri Theatre was then reopened as a fully operational performing arts center.

Anyone ever consider flying a screen and show a classic film now and then?

The Missouri theatre was operated by DURWOOD and DUBINSKY and later it was an AMC THEATRE.{Dunwood Corp.}

A fire broke out in the Missouri Theater complex on Feb. 18, 2011. Fast-acting firefighters took drastic action to save the theater itself from fire damage. The theater only sustained smoke damage. Dressing and rehearsal rooms, and theater office space, in adjacent buildings were the only areas significantly damaged by fire.

City looks into fire cause

A few photos of the restored Missouri Theatre are displayed in the portfolio of Henderson Engineers, one of the companies that has worked on the theater. Click on the Missouri Theatre thumbnail (#3, top row of featured projects) on this page.

The Missouri Theater used to be owned by Durwood Theaters Durwood also owned the Electric Theater, Skylark and Belt Drive-in theaters. It is located on Edmond Street, between 7th & 8th. It was and is still St Joseph’s most elegant theater. In 1927, 2 Seaman & Schuske workmen spent 2 months building the box office. The box office was constructed of ornamental steel and grille work, the upper and lower parts were covered with mosaic tiles of many colors This box office has since been replaced with a more modern one. There’s quite a bit of facial difference between what it looked like in the 1930’s and today. The Missouri usually only played a cartoon and one A Class movie. In 2011, the theater suffered some smoke damage from a fire in an adjacent building. The Missouri Theater is now primarily an Arts Theater; dancing, singing, & misc acts. The last date movies were shown: Tuesday September 8, 1970. The last movie shown was Elliott Gould and Candice Bergen “In Getting Straight”.

Wow what a theatre!!