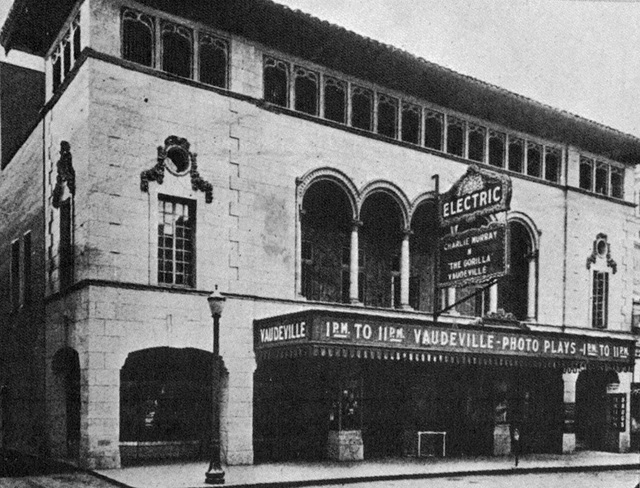 Built on the site of the Majestic Theatre which had opened on October 13, 1910 (some of that structure was utilized in the new Electric Theatre). The Electric Theatre was opened on September 23, 1915 with a mix of vaudeville on stage and Clara Kimball Young in “Trilby” on the screen. It was designed by the Boller Brothers. It was expanded, again the work of the Boller Brothers and reopened on October 21, 1926. It was renovated in 1946/1947.

The Electric Theatre was closed on October 28, 1961 with John McCarthy in “The Snake Woman” & Kieron Moore in “Doctor Blood’s Coffin”. The auditorium was demolished in 1962. The façade & lobby went into retail use. The remains of the building were demolished on November 19, 1977.

Here is the second item:

This theatre should have an aka Majestic Theatre. The Majestic Theater Grand Opening: Thurs Oct 13,1910, renamed to the Electric Theater, Grand Opening: Thurs September 23,1915 showing silent movies. The Grand Opening show was Wilton Lackaye and Clara Kimball Young in “TRILBY”. Admission was 10 cents Last date open was Saturday, October 28, 1961 The building was demolished in 1977 The last movies shown: Susan Travers in “The Snake Woman” and Kieron Moore in “Doctor Blood’s Coffin”.

That explains the two American Contractor items from 1915. The Electric was the Majestic, both remodeled and expanded.

The photo of the smaller theater cannot be correct. It’s obviously a different building.

SethG: Good catch. The Majestic was expended to become the Electric in 1915, and those cars parked in front of the smaller theater are from considerably later than 1915, so it can’t be the old Majestic.

Joe, I just found the picture in question on the St. Joseph Memory Lane page, and he says the smaller theater was demolished in 1926, which, if correct, puts those cars back in the correct era.

If that’s the case then the 1915 rebuilding project as a two-story theater must not have been carried out. I checked David and Noelle Soren’s list of Boller theaters and they list it as “Electric (Majestic) Theatre – 1915, 1926, 1946-47” so it’s still a Boller design, but they worked on it three times; probably a scaled down remodeling of the original 1910 Majestic in 1915, a rebuilding in 1926, and another remodeling or renovation in 1946-47. I wonder if they kept the lower parts of the original walls in the 1926 project?

The Electric Theatre launched September 23, 1915 with “Trilby”. The previous Majestic Theatre had been razed on May 14, 1915. A $225,000 new Electric Theatre was built using elements of the original in an expansion project culminating with its relaunch on October 21, 1926 with “Subway Sadie.” The new-look Moorish design included a $35,000 Wurlitzer organ and another $200,000 plus in improvements.

The theatre was closed on October 28, 1961 with a double-feature of “"The Snake Woman” and “Doctor Blood’s Coffin.” The theatre was stripped with the auditorium razed in 1962. The facade, lobby and other elements remained after being retrofitted for retail use. The remainder of the building was subsequently demolished on November 19, 1977. 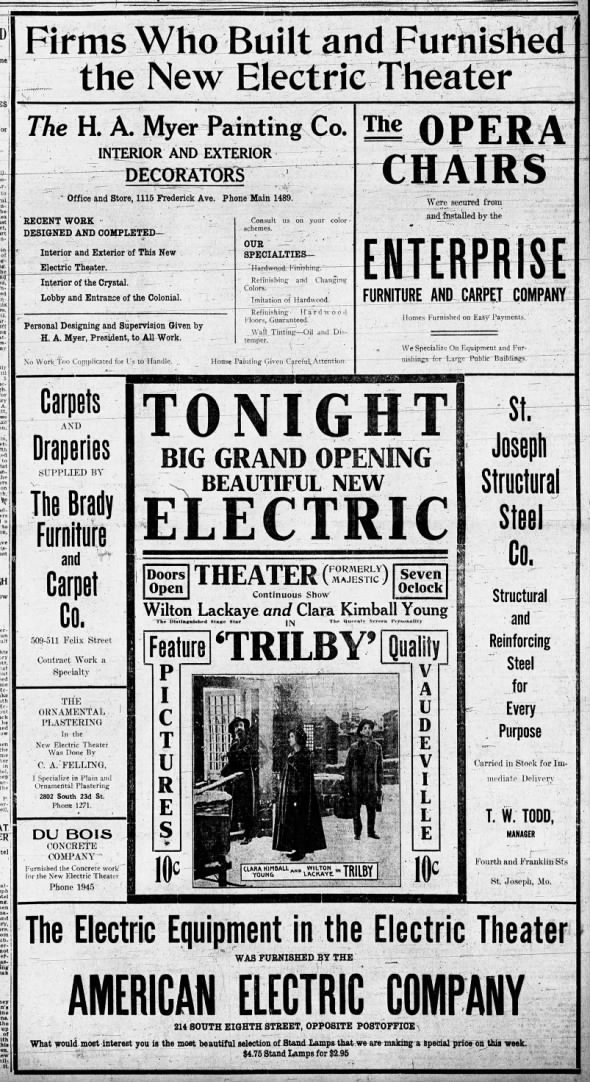