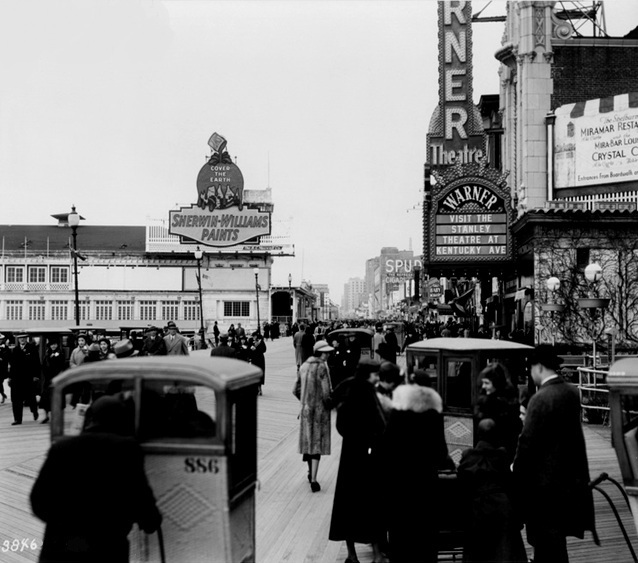 Located on the Boardwalk near the Million Dollar Pier and built on the site of the Great Northern Opera House. The Warner’s Embassy Theatre had its inaugural opening on June 19, 1929 with Warner Bros. ‘All Color, All Talking, All Dancing’ “On With the Show” plus a stage show. A gala opening happened on 22nd June 1929. Designed by Philadelphia architectural firm Hoffman-Henon Co. in a Moorish-Atmospheric style, seating was provided for 4,189, with 2,628 in the orchestra, 1,251 in the balcony and 310 loge seats. The proscenium was 65ft wide. It was equipped with a Wurlitzer 4 manual, 29 ranks organ which was opened by organist Stuart Barrie.

In the 1950’s it was renamed Warren Theatre and later became a live venue, attracting artistes such as Katherine Cornell, Brian Aherne, Diana Barrymore, Walter Slezak, Sam Levine, Jane Meadows & Julie Harris. On July 29, 1960, “Windjammer” was presented in CineMiracle 3-strip projection. The Warren Theatre had closed by 1966 and was converted into a bowling alley.

By 1978 the lobby was in use as a pizza parlor. In the late-1970’s the auditorium and main lobby were demolished to make way for a casino. The façade, which is listed on the National Register of Historic Places was preserved and served as the Boardwalk entrance to Bally’s Casino. In January 2021 news is that Caesars Atlantic City is getting a new theatre and a resident show in the first quarter of 2023. The project will incorporate the façade of the former Warner Theatre from 1929, which is part of the casino’s exterior facing Boardwalk.

The Warner was a hot dog place in the 1980s called Boardwalk Rogers:
http://tinyurl.com/nrfdry

Here is another view:
http://tinyurl.com/2w47bnh

You can see the marquee in this postcard:
http://snipurl.com/vupme

The marquee can be seen in this 1941 photo:
http://tinyurl.com/2djsago

There was a mention that in the summer of 1959 or 1960 Windjammer played in Cinemiracle at the Warren. I can’t find any ads for this. All I see are ads for live shows during those two summers. In late 1960 the interior was demolished.

Never mind, I found an article that says Windjammer will start on July 29, 1960 at the Warren.

Strange that I see articles in July 1960 that also mention its going to be razed in the fall 1960.

I have two original seats from the Atlantic City Warner Theatre. There are two figures in Moorish-style clothing depicted in the cast iron seat sides. Based on what I’ve seen in old photos, those seats were originally painted with different colors for contrasting details, but at some point they were repainted a uniform brown (no doubt to save money.) I’m considering repainting, but only if I can identify the original color scheme (all photos I’ve found of the AC Warner seats are b&w.) Does anyone know what the original colors were for my seats? Thanks.