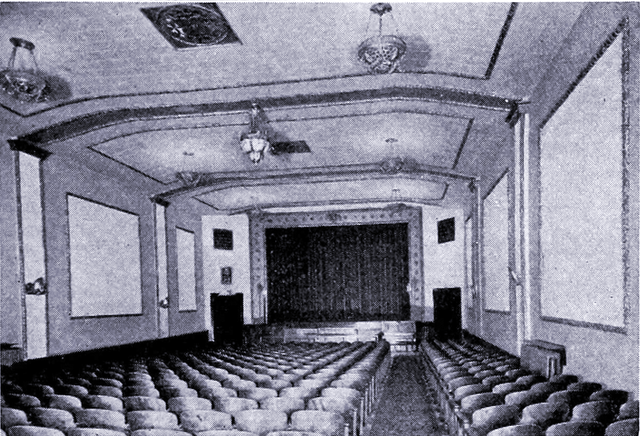 Greens Theater was built and opened in 1914. By 1941 it was known as Green Theater and operated through to 1950 and beyond…

This was another very early theater. Lloyd Palmer, who in 1924 took over the Iris Theatre in Postville, Iowa, had his start in show business as a musician at the Green Theatre in Anoka in 1915, according to a brief item about him in Boxoffice of November 5, 1955.

The Green Theatre was redecorated and got a new front in 1946, as reported in Boxoffice of June 1 that year.

A photo of Green’s Theatre in Anoka appears in this advertisement for Wright-DeCoster sound equipment in the June 28, 1930, issue of Motion Picture News.

I just noticed in Street View that the building has “Greens Theater 1914” emblazoned on its parapet. Undoubtedly that was the year of construction. I notice that the decorative frieze seen above the entrance in the 1930 magazine photo I linked to is gone. As there is fenestration on the second floor now, I’m thinking the frieze might have been stained glass.