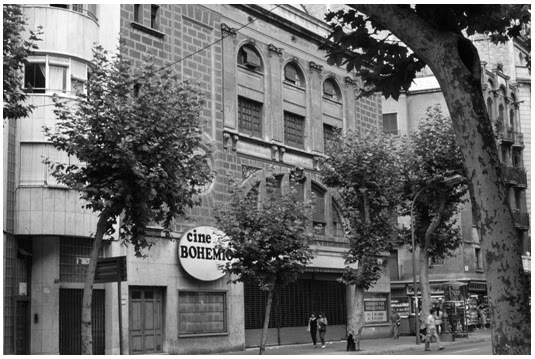 Located in the district of Hostafrancs, to the south of the city centre. The Cine Boheme opened in 1911 and was designed by an architectural firm known as Palamo.

Seating for 1,500 in the auditorium was located on orchestra and balcony levels. The front of the balcony was open, and had a decorative wrought iron front, which extended along the sidewalls in narrow slips.

The Cine Boheme was closed for some period of time, but re-opened in 1929 when the International Exposition of Barcelona was held in the city in 1929.

During the Spanish Civil War, the Cine Boheme was used for many political meetings. It was re-named Cine Bohemio in 1939.

The Cine Bohemio closed on 26th May 1986 with "Nightmare On Elm Street" and "Re-Animator". It was demolished in August 1986 and a modern office block is located at the site.

A vintage photograph of the then recently closed Cine Bohemio in August 1986:
http://flickr.com/photos/chausson_bs/2283978961/