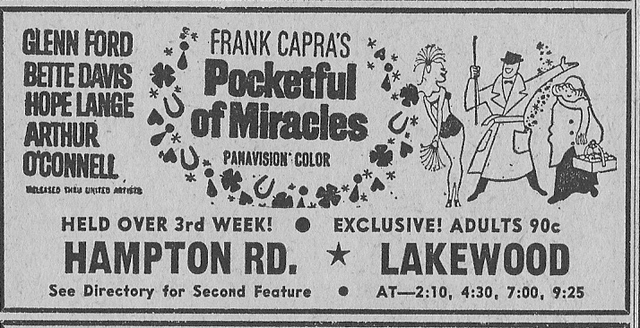 The Hampton Road Drive-In was opened on May 12, 1950 with Joel McCrea in “Colorado Territory”. Former drive-in located near Kiest Park, was very popular into the 1970’s, but closed at the end of the 1978 season.

Here is an aerial view, circa 1955:
http://tinyurl.com/yeenwog

The Hampton Road Drive-in launched with “Colorado Territory” on May 12, 1950 with spaces for 750 cars. It was the second of three back-to-back-to-back openings for C.D. Leon’s fledgling Leon Theatres Circuit. The Garland Road Drive-In opened on April 7th and the Denton Road Drive-in opened on June 23d. In addition to and probably because of the business at the Hampton, the theater was robbed often in its first five years. And Leon’s company made news in Garland when it tried to get involved in pay television service.

At the end of the 1958 drive-in season, Leon subleased the Hampton and Denton Road locations to Claude C. Ezell’s newly-reformed Ezell Theater Circuit / Bordertown Theaters Inc. Ezell with his partner had opened Dallas’ first drive-in in 1941. But Ezell sold his portfolio in 1955 to Bordertown circuit. The Ezell/Bordertown acquisition gave Ezell 38 Texas drive-ins. That represented the largest drive-in chain in the state. The clout brought with it a new policy allowing the drive-ins to get films just 31 days after their initial plays in traditional theaters instead of the six-month window. While that helped most of the locations, Oak Cliff was theater-rich which likely gave the Hampton Road a little less bounce than was anticipated.

Ezell held most of his theaters but dropped the Hampton Road at the end of 1963 with Leon back in charge. Leon quickly identified a new operator and would soon sell the drive-in to Rowley United Theater Circuit on Feb. 28, 1964. During the period of operation, Rowley became United Artists which operated the theater. With theaters closing around Oak Cliff, the Hampton enjoyed its best years since the 1950s. But there was some trouble. Don Snyder who managed the Hampton Road when the Uniform Time Act went into being in 1967 lobbied against Texas’ honoring the act. He worried that drive-ins like his would be put out of business due to late summer starts and loss of concession revenue. That complaint went unheeded, however.

UA used McClendon to book the Hampton Road and other drive-ins beginning in 1972 but would divest itself of the Hampton two years later. The Hampton, Town & Country Drive-In and Jefferson Drive-In would form the Southern States Theatres circuit for would be the Hampton’s final consecutive years of operation ending in 1975. It appears as though “Summer School Teacher” and “The Student Teachers” is the double feature that ends Southern States’ run with the Hampton. The Hampton Road Drive-In comes back for one more season in 1978 as an independent wrapping up its lifespan just shy of thirty years. That’s likely its original lease. The drive-in was demolished and was home to both a family practice medical building and the neighboring South Hampton Community Hospital that were operating into the 2010s.

The hospital facilities were both built in 1984.. Today,“it appears” the hospital has closed its' doors. The orthopedic Dr’s offices appears to be active.