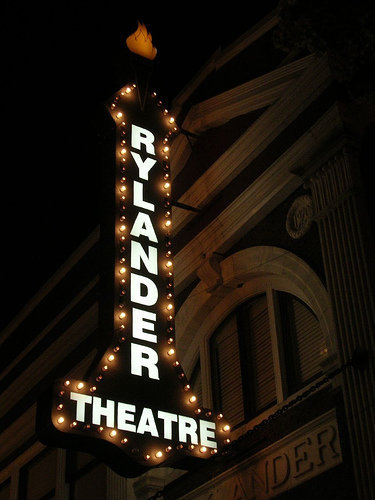 The 874-seat Rylander Theatre, which first opened in 1921, was renamed Roxy Theatre by 1950 and was closed in 1951. It has returned to its original name, reopening in 1999 after undergoing extensive renovations. It operates showing a mixture of second run, family and classic films as well as hosting stage shows.

A Moller organ of 11 ranks and 3 manuals was donated to the theatre by James Thrower of Atlanta. The instrument is played by house organist, Dr. Fred Bosca.

Built in 1921 by Americus businessman Walter Rylander, this theatre hosted live entertainment and motion pictures until its closure in 1951. Designed by C.K. Howell of New York, the Rylander was (and is!) a visual feast of ornate plaster work, stencils, and painted murals. Closed for over 40 years, the theatre reopened in October, 1999 with former president Jimmy Carter and his first lady in attendance. In a second inaugural on October 31, 1999, the Rylander’s “Frank Sheffield Memorial” organ—a Moller—was dedicated with the talented Ron Rhode at the console (this was the third organ to be installed in the theatre after a small Kimball and later a Robert-Morton performed silent film duties.) Since then, numerous first tier theatre organists have been featured here, and the organ has been professionally recorded by Ron Rhode. The organ is often featured prior to shows and in concert. Dr. Fred Boska serves as house organist, assisted by John McCall and other members of the Atlanta Chapter of the American Theatre Organ Society—an organization that has had a close association with the Rylander.

The restoration architect was Lane Green who has won several honors and awards for his effort at the Rylander. The theatre’s restoration was spearheaded by Americus' “Renaissance Man”, former mayor Russell Thomas and his wife, Andrea.

I just learned through a friend in Atlanta that the Fox Theatre has formed the Fox Institute to help restore/repair other theatres throughout the State of Georgia. The theatres are as follows: Rylander in Americus, Imperial in Augusta, Holly in Dahlonega, Gem in Calhoun, Grand Opera House in Macon, Springer Opera House in Columbus, DeSoto in Rome, Strand in Marietta, The Ritz in Thomaston, The Ritz in Brunswick, Emma Kelly in Statesboro, Douglass in Macon, Cox Capitol in Macon, Morton in Athens and The Grand in Fitzgerald.

The Atlanta Constitution article says that the DeSoto was built in Rome GA (1929)and that it was the first movie palace in the South designed for “talkies”.

What a magnificent job they did in restoring this movie palace, way to go Americus. I wish other towns would follow your lead and realize what treasures they have and won’t ever have again.