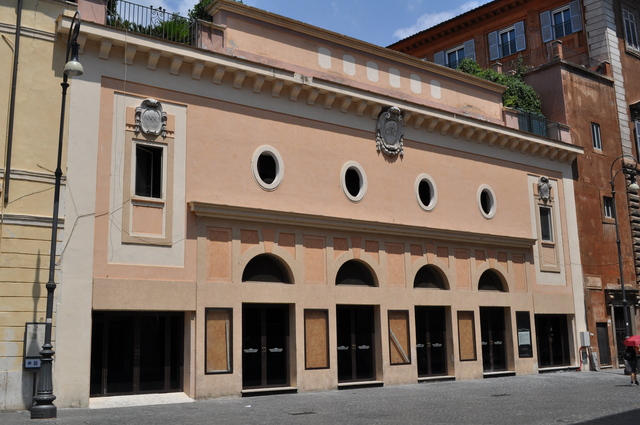 In 1900, the Lumiere Brothers screened films in the Lux et Umbra, located in the courtyard of Palazzo Ruspolo Roe, overlooking the Via del Corso. In 1915 it had been such a success that work began on enlarging the building to the plans of famous architect Marcello Piacentini.

By 2008, it had been refurbished and re-named Spazio Etoile, in use as a special events and conference venue. However this was not to last long, and the building was closed by 2009. In December 2009, work commenced to convert the building into a private club. Conversion work was continuing in July 2010. In 2012 it was converted into a Louis-Vuitton store. There are 19 cinema seats which shoppers can use to view short movies by renown directors.

Saw “Ultimo tango a Parigi” (“Last Tango in Paris”) here in February 1973 in a smoky theatre.

“Riso amaro” (Bitter Rice) with Silvana Mangano opened here and at the Capitol on December 6, 1949.

The then-new Italian release “Il segreto di Villa Paradiso” with Luisa Ferida and Mino Doro was playing on May 18, 1940, according to a listing in Il Messaggero. Four shows, starting about every two hours, from 4:30 P.M. to 10:15 P.M. Almost no cinemas in Italy had showings that began earlier than 4 P.M.

On December 6, 1949 the film Riso amaro (Bitter Rice) opened here and at the Cinema Capitol.