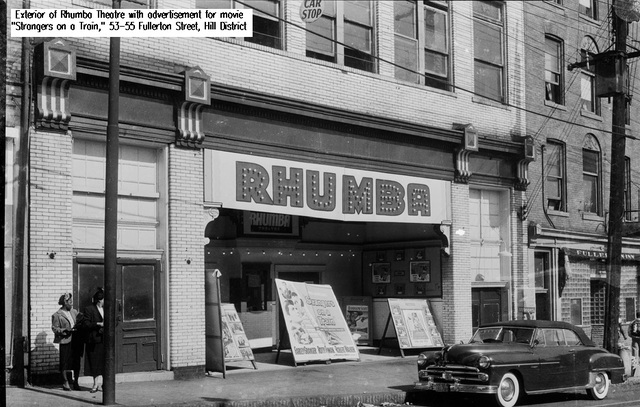 Located in the Hill District neighborhood of Pittsburgh on Fullerton Street, near Wylie Avenue. The theatre had at least four names. It was the Burke’s Theatre by 1926. Renamed Golden Theatre by 1934. On September 25, 1935 it became a nightclub named Javo’s Jungle which closed in February 1937 due to liquor licence violations. By April 1937 it had been renamed Rhumba Theatre. It was operated by Jacob Solz and operated as an African-American theatre. It was still open in 1957.

It was demolished in 1958 to build the Civic Arena (which was demolished in 2011). All property on Fullerton Street (which no longer exists) by 2008 had been taken over by the Urban Redevelopment Authority of Pittsburgh.

Here is one parcel that has been taken over by the authority. No street number is given. I can’t get Fullerton Street to map, so either it has another name now or the redevelopment authority has obliterated the street.
http://tinyurl.com/6gb3ho

Here is an April 1937 news item from the Pittsburgh Post-Gazette:
http://tinyurl.com/7ekypt

Thomas Burke Jr. and Martin Burke built a two-story, multipurpose entertainment and retail complex at 53-55 Fullerton for just $7,000. The building contained a dance hall, a nickelodeon, a pool hall and a retail shop when it opened in 1914. The theater primarily served African American audiences but all were welcomed. The dance hall / cabaret went by names including the Ritz, the Royal Garden Cabaret, and Javo’s Jungle. The theater was known in its silent era as Burke’s Theatre. Edward Burke served as a projectionist during the venue’s run. It appears that the Burkes sold out in 1930 without converting to sound.

The area in which Burke’s Theater was situated was a vibrant African American community with great night life. Music and meetings were held just doors away at the nearby - and famed - Loendi Social and Literary Club that had opened for elite local African American doctors, business leaders, professors and others back in 1897. But the nightclub held within the walls of the theater complex was anything but exclusive drawing folks of all social classes.

The adjoining nightclub had a tumultuous run and lost its operational license in 1927. Following Prohibition, as Javo’s Jungle, the operation was challenged again in 1936 over its liquor license and was stripped of that license in February of 1937. Renamed the Ritz, it was closed for allegedly running a numbers game that led to a major bust in 1938 halting the business for a period. Another bust came in 1953 where 148 persons were arrested for drinking tax-free in the nightclub that had no valid liquor license.

Meanwhile, the Burkes left their namesake theater apparently at the expiry of a 15-year leasing cycle apparently without converting to sound. The next operator did convert to talkies later that same year under its new name of the Hill Theatre. The Hill changed owners soon thereafter briefly becoming the Fullerton Theatre in 1932. In March of 1932, new operator E.J. Golden took on the venue changing names to the Golden Theater.

Unfortunate events that were suffered by the nightclub / cabaret were also occurring at the theater. Jacob and Sidney Soltz had taken on the venue renaming it as the Rhumba Theater. In 1937, the theatre suffered a minor fire that almost caused a panic; that was followed by a lye incident where a patron through skin-burning lye at fellow patrons. A gas explosion in 1952 caused minor damage and no injuries. And there were minor projection room fires, as well.

On the entertainment side, the Rhumba Theatre played African American led films from Sack Amusement. The Rhumba also hosted live music shows including a regular gig for Dakota Staton who went on to have a hit single in the 1950s. The theatre soldiered on despite a 1953 announcement of the Lower Hill Development / Redevelopment project that included the Civic Arena that would open on September 17, 1961. The Leondi club moved to new digs in 1958. The owners of the Rhumba were forced out in 1958 and the property razed. The Soltzes and the building’s owner successfully sued the City for shorting them the money they felt they were promised after the building had already been razed. The building - a vital everyperson’s part of the Jazz Age in Pittsburgh was finally silenced.