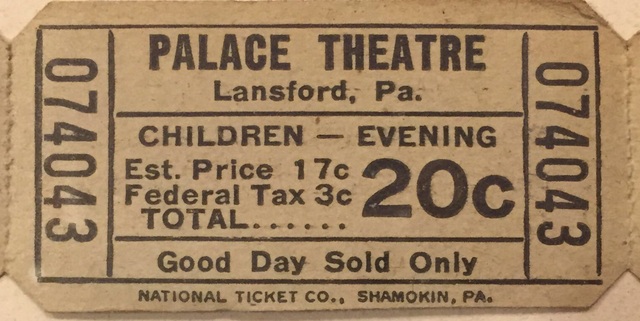 The Palace Theatre had not been demolished when Google’s street view camera last passed by, nor when the satellite view currently displayed was made. As far as I know it is still standing today. The building runs along the east side of Coal Street, stretching the entire block from Bertsch Street to Patterson Street. Google Maps shows only the view from Patterson Street, where the large stage house sits. Half a dozen photos from the John Lewis collection, including views of the entrance, can be found on this page at CinemaTour.

The location, as well as the size and shape of the building and its architectural details, which include a tapestry brick front, very popular in the late 1910s and early 1920s, indicate that the Palace Theatre was this project noted in the “Contracts Awarded” column of the July 1, 1922, issue of The American Contractor:

John T. Simpson was licensed as both an architect and engineer. He established an architectural practice in Newark in 1913, but had been an engineer prior to that. Judging from the notices in various trade journals of the period he specialized primarily in school buildings. The Palace might have been his only theater project.

The theater has been demolished.

Goodbye to another Palace. CinemaTour has a few exterior photos made in 1989.