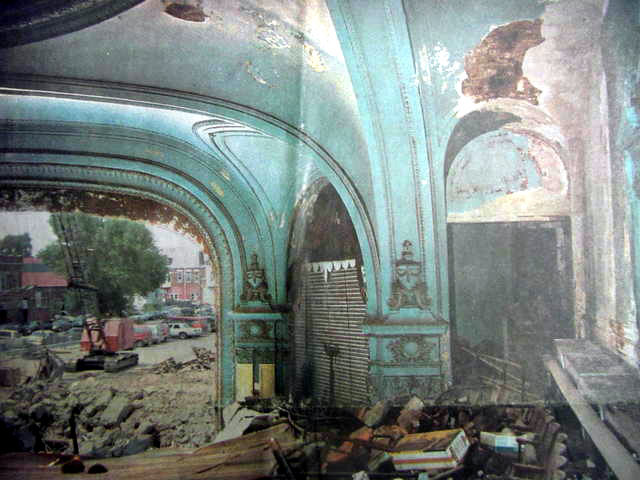 Opened on March 1, 1919 for the Schoenstadt chain, this ‘Back of the Yards’ neighborhood theater was designed by the firm of Rapp & Rapp. It contained a 2/6 Wurlitzer organ, which was installed in 1923.

After an seven-decade career, the Peoples Theater was closed in 1989, and converted to retail use. It was razed in December 2001, and a couple years later, a Walgreens drugstore was constructed on the site of the theater.

Great pic. It’s a shame it survived 70 years, and came down so recently. Current economic conditions can’t possibly help to save a lot of these places that may still exist.
Years of no heat, who knows how much asbestos, etc. just takes the fight out of most of them.

1984 doesn’t sound like the right year for “The Warriors”.

It IS the correct year. BEST DEFENSE was a 1984 comedy starring Dudley Moore and Eddie Murphy. Back in the good old days, neighborhood theatres would do stuff like that. They would play a current film doubled up with an older film, usually from the same studio. Both BEST DEFENSE and THE WARRIORS are from Paramount. Back in 1982, I worked at the Village Theatre. One Paramount double feature we had was SOME KIND OF HERO (1982) and THE WARRIORS (1979). Unfortunately, this sort of thing doesn’t happen anymore.

That makes sense. Back then I guess it would’ve been more difficult to get movies on video. So they could make money booking old favorites.

Too bad the Peoples Theatre is gone.

I toured the PEOPLES Theatre (and coincidentally the nearby COLONY Theatre) in the 1980s with an organized tour group. There had been some changes to the lobby some decades past but the auditorium was mostly intact. On Monday, January 13, 2003 the Chicago Tribune did a series titled “Research and Destroy – A Squandered Heritage, Part 1: The Threat to Neighborhoods” by Blair Kamin and Patrick T. Reardon where a huge color photo of the under-demolition PEOPLES made the article’s point very clearly. Part of the article read “Go to the former sites of buildings that served as icons of neighborhood commercial districts — the Woodfield and Old Orchard shopping centers of their day.

Among them: a 1920s Back of the Yards movie house designed by Rapp & Rapp, the architects of the Chicago Theatre, at 1616-24 W. 47th St. Called the Peoples Theater and distinctive for its Art Moderne and Classical details, it was a smaller version of the more elaborate downtown movie palace, featuring a whimsical, triple-arched facade that formed a gateway to the fantasy world inside. It was destroyed in 2001. A Walgreens is rising on the site."

Looks like it had a very nice interior. Sad that it’s gone.

Grew up going to People’s every Saturday morning in the winter for 50 cents. 25 cents to get in, dime soda and 15 cents for popcorn. Miss it a lot