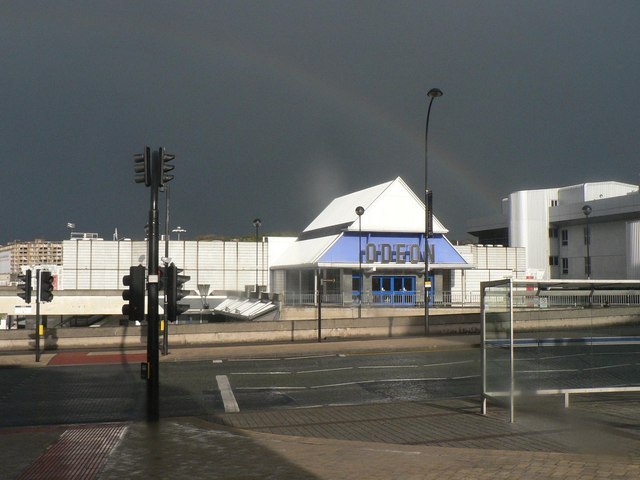 Located in the city centre, the 7-screen Odeon opened on 5th March 1992. Five of the seven screens were fitted into the shell of the former Fiesta Nightclub, the other two being the original former Cinecenta auditoriums (which have their own page on Cinema Treasures-Odeon Sheffield (Fiesta Twins). In December 1994, two additional screens were added, and in December 1997, screen 10 was added and the total seating capacity was 1,661.. Seating capacities in the screens ranged from 253, down to 115.

In November 2018 it became an Odeon Luxe cinema with the total seating capacity reduced to 569. Seating capacities now range from 84 down to 39.

It has to be said that this is a lacklustre cinema even by multiplex standards, and is rumoured for closure and redevelopment in the near future.

The Roxy next door to the Fiesta Club (Now Odeon Cinemas) was originaly opened as The Top Rank Suite in the mid 1960’s so was a dance hall, not a night club. Rank took over the running of the Fiesta Club before it closed. Eventually, they converted it into Cinemas, retaining the Fiesta name at first, then changing it to Odeon when the new Cross Burgess Street Odeon twins were to close.
The original Sheffield Odeon building (Bingo since 1971) is situated next door to the Roxy, which by the way is now the Sheffield Carling Academy.

A night photo of the Odeon appears here:–

The entrance and foyer in November 2009:–

This cinema was the last place I saw a 35mm screening to date, ‘One Day’ in August 2011 in one of the smaller screens. It was the last Odeon in the country to be fully converted to digital in November that year.