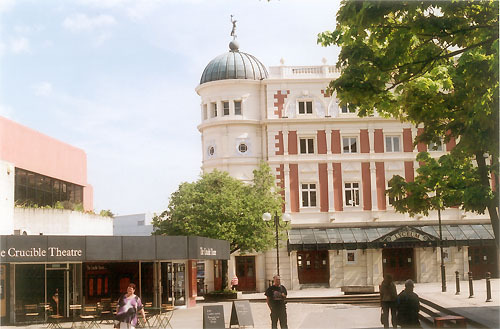 The Lyceum Theatre in Tudor Street Sheffield, now Tudor Square, was opened on Monday 11th October 1897 by The Royal Carl Rosa Opera Company, “Carmen” being the opera performed on opening night. The architect was W.G.R. Sprague and is now his only remaining theatre outside London.

Built on the site of the City Theatre, across the road from Sheffield’s famous Theatre Royal, the Lyceum Theatre is a free standing building with a corner entrance block topped by a dome tower. The auditorium is in superb rococo plasterwork with two slightly curved cantilevered balconies with broad pilasters at each level which contain bow fronted boxes. The proscenium arch has a rectangular moulded frame, painted in gold leaf which encloses an openwork rococo plaster valance across the top and corners and spreads halfway down the sides. It has a cove ceiling with fine plasterwork.

All the major stars of the day have appeared on the Lyceum stage. It was at the Lyceum Theatre in 1905 that Sir Henry Irving opened his Farewell Tour and it was his last full week on stage, as the following week, following a performance at the Theatre Royal in Bradford, Sir Henry died. For many years the Lyceum was operated by the same management team as the Grand Theatre in Leeds with productions booked through Howard & Wyndham. The D'Oyly carte Opera, Sadlers' Wells Opera and the Royal Ballet were all regular visitors to the Lyceum Theatre, along with pre and post London tours. For many years, during the summer months Harry Hanson’s Court Players presented a different play each week. The Lyceum Theatre also became famous for its spectacular pantomimes usually running from Christmas Eve till the 2nd or 3rd week in March, often produced by Emile Littler, Tom Arnold or Bernard Delfont in conjunction with John Beaumont - the Lyceum’s Managing Director. For several years, it was the pantomimes that kept the Lyceum open for the rest of the year. In July 1913 a series of short films demonstrating the Kinemacolour process rand for 2-weeks. In May 1916 the Lyceum Theatre was used as a cinema to screen the official propaganda film “Britain Prepared”. In August 1916 D.W. Giffith’s “Birth of a Nation” was screened, accompanied by a full orchestra.

By the 1960’s the theatre closed during the summer months due to lack of product, with these closed periods getting longer every year. The Associated British Cinemas(ABC) chain were approached to run films there during the summer months, but the cost of fitting the theatre out as a cinema proved to be too costly. In May 1966, following a week of Gilbert and Sullivan Operas by the ever faithful D'Oyly Carte Company, the Lyceum Management went into partnership with the Star Group of Leeds to run Star Bingo at the Lyceum during the summer months, with live theatre returning during the winter season. This continued for three years, then following a two week run of ‘The Desert Song’ by the local Croft House Amateur Operatic Society in March 1969, the Lyceum Theatre became a full time Bingo Hall, continuing until March 1972. By then, the Sheffield Odeon, just five minute walk away, had become a Top Rank Bingo Club and gradually even the Lyceum’s bingo patrons disappeared.

An application to demolish the closed building was refused and the theatre was designated a Grade II Listed building, since upgraded to Grade II* Listed.

During the next 20 years, the building was closed more often than it was open. Several owners tried to run it as a Pop Concert venue, but each time problems with liquor licences always ended in closure.

As early as 1975 a Lyceum Theatre Trust had been formed but progress for them was very slow. In 1990 Sheffield attracted the World Student Games and with the help of European Grants and local funding an ambitious programme of restoration by the RHWL Company was begun. A completely new stage house was built along with new foyers and bars to the side elevation on Tudor Street. The entrance was moved from the corner to the side elevation and the new Deco inspired spaces blend well with Sprague’s original ornamental work. The Lyceum Theatre re-opened with a gala concert in December 1990, followed by a Christmas-New Year season of Paul Nicholas in the Broadway version of “The Pirates Of Penzance”. Pantomime returned to the Lyceum the following Christmas and it has reclaimed its ‘Famous For Pantomime’ title. The Lyceum Theatre is now run by a Trust, along with its modern sister theatre - The Crucible Theatre, which stands next door and is once again attracting all the major touring shows.

Simply beautiful, a real gem. Thank God they saved it.

A very beautiful theatre – some photos:–

Thanks Ian for putting on the photos of the Lyceum. Sheffield never thought it would ever reopen, but thank goodness it did. It was the first live theatre I ever went to in Janaury 1958 to see Ronnie Hilton in the pantomime ‘The Sleeping Beauty’ which was presented by Gwladys Stanley Laidler, Francis Laidler’s(of Bradford Alhambra fame)widow.

A classic case of ‘give a city back its old theatres and the audiences will come’. The Lyceum now takes in almost every major touring show that has either just left the West End or is on its way.

Today, Sept 29th, The Yprkshire Post reports that on Monday next week Sheffield Council are to pass plans for a Â£4.5M restoration of Tudor Square. It will include new paving, new seating and greater landscaping of the area to make the square a much more accessible space. The new square will only enhance the charm of visiting the Lyceum and Crucible theatres.
(maybe someone can post the link to the article here!)