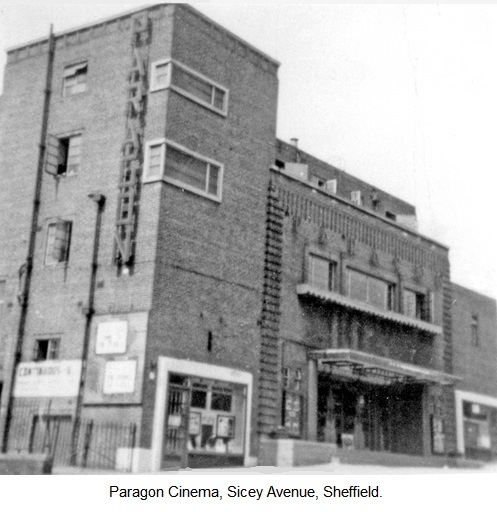 The Paragon Cinema stood in Sicey Avenue in the Firth Park district of Sheffield. Designed by Robert Cawkwell of the firm Hadfield & Cawkwell who later designed the Sheffield Ritz and Rex Cinemas. It was the first Sheffield cinema to be built in the sound era and Cawkwell was able to design the building with the co-operation of the RCA Sound people as consultants.

Built of sand faced bricks on a steel frame with the canopy, main doors and half round pillars at the entrances being faced with stainless steel. A waiting lounge led off from the entrance hall and on balcony level there was another lounge and a small café with modern tubular steel furniture. Seating was for 1,386, with 1,034 in the stalls and 352 in the balcony and was in shades of vermillion, beige and black. These colours also formed the main colour scheme of the whole building. The Paragon Cinema had a very wide proscenium opening - 40 feet - and was flanked by black and gold pillars. The stage side legs and pelmets were in vermillion and the main house tabs were beige which had coloured lights projected on to them. Silver festoon tabs came down over the screen. Much of the interior furnishings were designed by Kenneth Friese Green of Church Street, Sheffield. Friese Green were specialists in cinema furnishings and Kenneth’s father had been a pioneer of cinematography.

The Paragon Cinema opened on 1st October 1934 with Spencer Tracy in “Bottoms Up”. The wide proscenium arch made the Paragon Cinema ideal for installation of Cinemascope in 1955, enabling a large screen to be fitted and the first scope film shown was “The High And The Mighty” in February 1955. The Paragon Cinema never opened on Sundays. The final film was shown on Wednesday 28th February 1962 - Troy Donahue & Dean Jagger in “Parrish”. The cinema was then demolished.