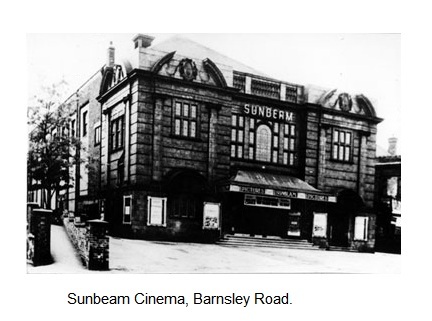 The Sunbeam Pictures was built on Barnsley Road at the junction of Skinnerthorpe Road in the Pitsmoor district of Sheffield. The Sunbeam Pictures opened on Saturday 23rd December 1922 with Wallace Reid in “The Love Special” & A.E. Coleby in “The Right to Live”. It was built set back from the road and was an imposing brick and stucco building, with a large embossed rising sun motif on the façade, set inside an ornamental parapet. A central entrance to the cinema was covered with a canopy.

Seating was for around 1,350, later reduced to 1,156, in stalls and balcony. The architect was Walter G. Buck, who was also a director of the company who owned the cinema, Sunbeam Pictures Ltd. In 1927 a billiards hall was opened adjoining the cinema.

A Cinephone sound system was installed in 1930 and the first talkie screened here was a musical “The Rainbow Man” starring Eddie Dowling. In January 1932 a Western Electric(WE) sound system was fitted. In 1935 a shelter was added to the side of the cinema and in 1936 the canopy over the entrance was extended.

Sunday opening was started in September 1954. CinemaScope was installed in April 1956 and the Judy Garland & James Mason film “A Star Is Born” was the first ‘scope’ film screened at the Sunbeam Picture House. The cinema closed on 2nd September 1961 with a family double bill programme - Dale Robertson in “Son Of Sinbad” and Gordon Scott & Vera Miles in “Tarzan’s Hidden Jungle”. The cinema was demolished and a petrol station was built on the site. This has since been demolished and a Tesco Express supermarket now stands on the site.

The location shown on the map is incorrect. It was 0.7 mile further south along Barnsley Road. The Tesco Express can clearly be seen on the underlying map.