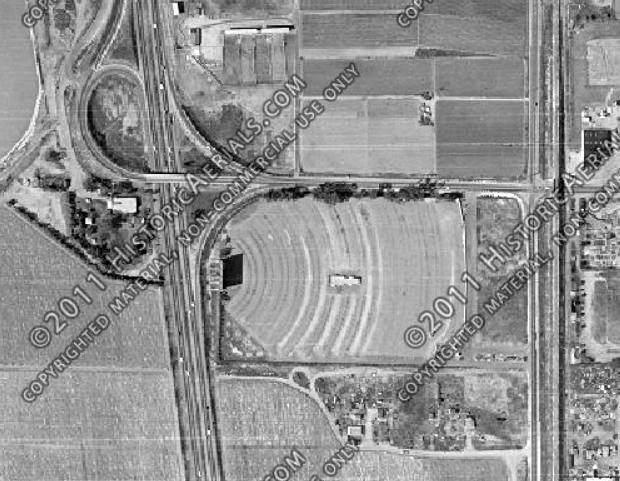 The Big Sky Drive-In was opened on June 22, 1955 with Dale Robertson in “Son of Sinbad” & Randolph Scott in “Rage at Dawn”. It was closed in 1980. The theatre was razed a few years later to make way for an industrial park.

There are aerial views of the drive-in from 1964 and 1980 on this site. Enter the theater address to see the photos.
View link

Am I missing something? Is this theater the Big Sky or the Blue Sky?

Uploaded aerial view 1964. It was called the Big Sky. Must be the wrong picture??

But that is a nice looking marquee!!

The Big Sky Drive-In opened in June 1955 at 2245 Main Street in Chula Vista. With 21 acres of space, its car capacity of 2000 made it one of the four largest ozones in the U.S. (Los Aitos in Long Beach held 2100 while the 41 Twin in Franklin, Wisconsin, and the Twin Open Air in Oak Lawn, Illinois, were the same size as the Big Sky). The full-color opening night features were Howard Hughes' Son of Sinbad, along with the Randolph Scott western Rage At Dawn. The stainless steel-filled snack bar was dubbed The Sky Bar, and for years the Big Sky advertised “Always two cartoons!” A “Kiddieland” playground on the property included swings, slides, and whirls. This drive-in went dark in July 1980. An industrial park was eventually built on the property.

The Blue Sky marquee posted to the photo page is a different theater – uploading two shots of the Big Sky marquee now.

Boxoffice, April 10, 1961: “The Big Sky Drive-In at San Diego, owned by J. E. Poynter and Wade E. Allen, has been sold to Lou Berman and associates. Berman also operates the Harbor Drive-In at Chula Vista, 101 at Ventura and Sky View at Oxnard.”