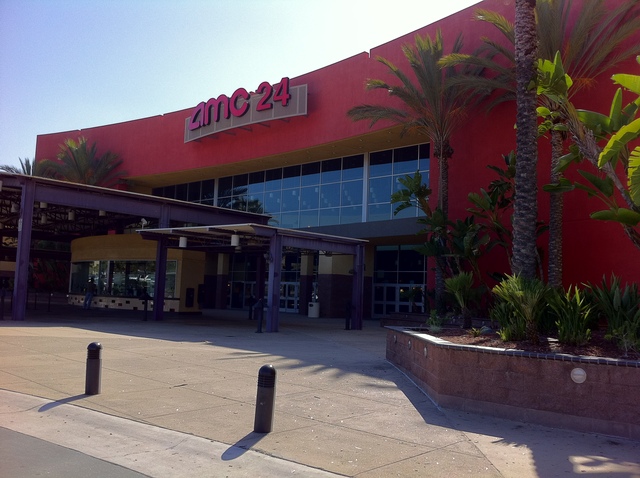 Opened on September 17, 1999, at Palm Avenue and I-805. At the time of opening, the theatre had two of the largest auditoriums in San Diego County (12 & 13). There were a total of 4,600 seats in its 24 screens. A popular theatre for families and teens from South San Diego, Chula Vista, and even Tijuana.

With the openings of Otay Ranch and Plaza Bonita, this theatre has slowed, but additions like 3D and IMAX have made it a quality destination. In 2011, 10-screens were mothballed.

AMC has been running this as a 14 plex (walling off one wing) for the better part of the past year. They are looking for someone to take over the space occupied by those 10 auditoriums.

All screens I guess have reopened

AMC Entertainment has been VERY schizo since the pandemic i.e. Apple Valley is a dumpster fire, Bay Street is still goinng strong and Kabuki = DISGUSTING!

That said: What has been said previously still holds true…

Not only is there only 14 screens per San Diego Theatre Reviews AND AMC app and website but IMAX is $12.49 (THAT IS NOT TYPO FOLKS!!!) for 11pm on 3/5/22 for the Batman! Also not a typo! The North Wing is still MIA I’m afraid…Sell outs will happen. It’s no better than Montclair or Sunnyvale (dine in circus atmosphere).

THIS IS WHAG HAPPENS WHEN YOU HAVE TOO MANY SCREENS! YOU HEAR THAT TORRANCE, ONTARIO AND ORANGE? 55 screens (orange) is too much! Ok rant off ☺☺

Just reading the information, it appears that AMC was willing to walk away at the expiry of a 20-year lease of this property - likely why it was rebranded as a Classic. But AMC re-upped the lease until May of 2029 in an agreement that reduced the footprint of the building to the main entry and south auditoriums (14 in total). That is likely why it lost its Classic branding as the vast majority of Classics have simply closed at the expiry of their leases.

The real estate firm shows a proposal to decouple and demolish the inactive part of the AMC Palm Promenade building housing the south screens. This would be done in favor of six newly-created yet diminutive retail spots that will interrupt the parking pass-through and connect the AMC 24 Minus Ten to the Burlington Coat Factory.

The combination of COVID-19 (beginning March of 2020), Wanda Group’s exit from its position in AMC Entertainment (2021), revolutionary platform changes due to streaming, and a lot of leases coming due after the big infrastructure build-out in the late 1990s and early 2000s during the entry of the megaplex era has made for a challenging environment for AMC. It’s tough to re-up a 24- or 30-screen expiring lease based upon the changes that have transpired since the relatively staid environment in which these megaplexes were first constructed. If that’s summarized as schizo, look for a lot more of that in the months ahead.