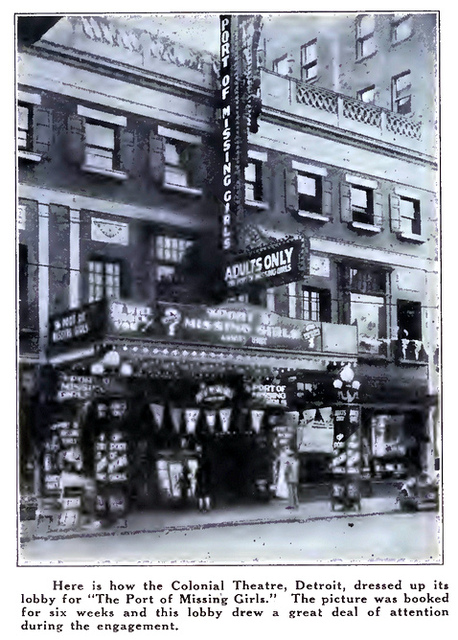 The Colonial Theatre, which was, like so many other Detroit theatres, a work of C. Howard Crane, was opened on October 8, 1917, and originally could seat 1,566 in its auditorium.

The Colonial Theatre had both vaudeville acts and motion pictures on its program in its early days, but soon switched to movies-only.

It was first owned, like the huge Hollywood Theatre, by the Cohen Brothers, and its original plans called for a nearly-3,000 seat palace, with over 200 box seats.

The Colonial Theatre was operated by Midwest Theaters Co. from the early-1940’s on, and closed on February 27, 1975. Not long after it closed its doors, it was razed.

The Colonial got a new facade, designed by architect Ted Rogvoy, in 1948. The project was underway according to an item in Boxoffice Magazine of June 19 that year. The Colonial was the headquarters house for Midwest Theatres by then.

Photo that includes the front of the Colonial Theatre is here:
http://www.shorpy.com/node/10182?size=_original

Nice link and photo Lesle,but I do not see the theatre,could you point it out when you have time.

It’s an odd little building. The top section is pure Greek Revival, but the lower two floors are Italianate, of a style that was some thirty or forty years out of date by 1917. It looks like it might have been a church that was altered and converted into a theater, with the lower two floors being an addition to a free-standing temple-style building.

I don’t know what theater it is. Cinema Treasures doesn’t list Colonial as an aka for any other Detroit theater, and of course it would have lost the name Colonial by the time this Woodward Avenue house opened in 1917. Either this theater is unlisted, or it’s listed under a later name and missing the aka.

I found a May, 1912, reference to a Colonial Theatre on the northwest corner of Lafayette Avenue (now Lafayette Blvd.) and Shelby Street, which must have been the theater in the photo. The Post Office was on W. Fort Street between Shelby and Washington, and Lafayette was the street behind it. The theater would have been in the 200 block of West Lafayette. I’ve clicked through the the first 100 of the 184 theaters listed for Detroit to see if one of them is in that block, but with no luck, and I think I’m getting carpel tunnel syndrome. Does anybody want to click through the remaining 84? If it isn’t there, it’s unlisted. Of course, it’s possible the house never even operated as a movie theater.

Thanks Joe,I though my eyes were going.

Since the photo linked in an earlier comment shows a different Colonial Theatre, I’m pleased to have found a photo of the Woodward Avenue Colonial on this page of Motion Picture Times, August 4, 1928.

In the film “ Searching for Sugerman” ,there is a passing shot of the Colonial theater

The Colonial Theatre closed as, by many accounts, a scary 24-hour grindhouse on February 27, 1975 at the end of a leasing period with a continuous quadruple-feature of Karl Malden in “The Summertime Killer,” Strother Martin in “Sssssss (Snake),” John Wayne in “Rio Lobo,” and a fourth film.