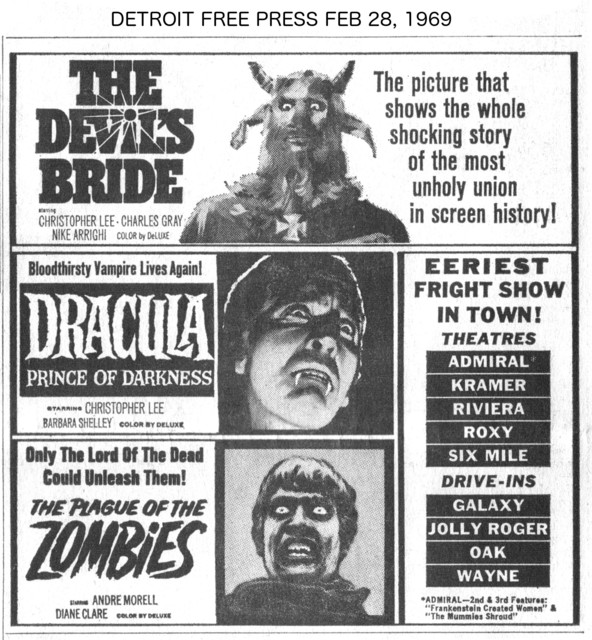 The Roxy Theatre was opened November 5, 1932. Around 1948 it was remodelled to the plans of architect Ted Rogvoy. Growing up in Detroit in the early-1950’s, the Roxy Theatre was one of three theatres on Woodward Avenue (along with the Colonial Theatre and the Fine Arts Theatre) all the kids in the neighborhood would end up at on Saturday and Sunday afternoons.

We saw all the B, C and D horror movies of the time, all the “giant monster” movies, all the “gladiator movies”, all the “atomic radiation causes something or sombody to change drastically” movies, as well as some pretty well known movies, like “Bridge on the River Kwai”. All for 35 cents. The Roxy Theatre usually showed triple features, and one of them always seemed to be a Randolph Scott cowboy movie. We’d stay there all day. It was closed in the mid-1970’s and was soon demolished.

It is amazing how many theatres are named ROXY as inspired by the once famous name of the New York City panjandrum of the movie palace: Samuel Lionel Rothapfel = “Roxy”. His namesake was the famous, 6000-seat ROXY THEATRE in NYC, which outlasted him by only 25 years when it was demolished in 1960. The whole story is nowhere better told than in that landmark book “The Best Remaining Seats: The Story of the Golden Age of the Movie Palace” by the late Ben M. Hall in 1961. Various editions of it are sometimes available from www.Amazon.com, but only the first edition contains the color plates, though many libraries have, or can order, copies of it. The Theatre Historical Soc. of America ( www.HistoricTheatres.org ) was his legacy, and they have much data/photos of the original ROXY, as well as the many other such namesakes.

This was a Detroit Theater Enterprises house in the early sixties, along with the Hollywood and Rio in Detroit.

There is a photo of the Roxy in disrepair on this site:
http://tinyurl.com/3hneez

The Roxy was one of three remodeling projects featured in an article in the April 1, 1950, issue of Boxoffice. All three projects were designed by Detroit architect Ted Rogvoy. Prior to the remodeling the Roxy featured a facade dating back forty years when the building was erected for retail space. Most of its features remained intact when the building was later converted into a theater.

Rogvoy updated the house with an Art Moderne porcelain enamel front that also stretched across an adjacent shop building. Above the theater entrance was a sign tower with ROXY spelled out vertically in block letters on all four sides. It was quite an elaborate remodeling for a 24-hour grind house.

The photo at Water Winter Wonderland (ken mc’s link above) does not depict the Roxy Theatre, but the later Roxy bar located down the block.

This page at Water Winter Wonderland has a vintage photo of the Roxy as it looked after Ted Rogvoy’s ca.1948 remodeling job, though the photo was taken after the theater had closed and fallen into disrepair.

The 1950 Boxoffice article about Rogvoy’s remodeling of the Roxy and two other Detroit houses has before and after photos of the Roxy on this page, though the text about the Roxy is on this page.

Also the below update was on the Water Winter Wonderland site, about the current B&W photo above the overview:

10/25/2005 – Detroit-NYC Al The picture here is actually of the abandoned Roxy Bar, which was in the building next to the theater. The theater was an Art Deco type place, faced in blue if I remember correctly. It closed in the mid-70s and was torn down shortly thereafter.

I’m the one who posted that comment on the Water Winter Wonderland site. It was based on my hazy high school era recollections of that neighborhood, so I was wrong in a few details. But I was right that the picture of the older white building above is not a picture of the Roxy Theatre. It is a picture of the former Roxy Bar, which was actually 2 blocks north of the theater. That building, believe it or not, is still standing. The Roxy Theatre is alas long gone, and was, as shown, faced in yellow/orange tiling.