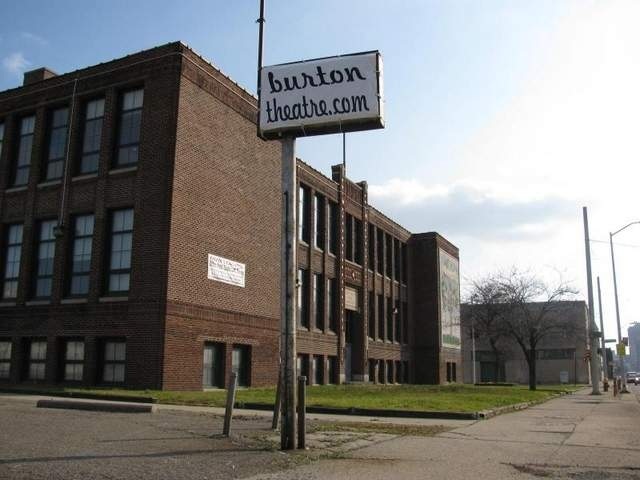 Opened in 2009 in the auditorium of the former Burton Elementary School, which dates back to 1924. The theatre featured an eclectic mix of art, independent, and documentary films and alternative programming. It abruptly closed in May of 2011 after a rent dispute with the property’s landlord. It later reopened as the Cinema Detroit, but in the summer of 2015 it was closed and was relocated to a building on 3rd Avenue.

An article about the closing with a picture of the school building that housed the theater: View link

This building was recently featured on “American Pickers.” The school is used as a warehouse by a local developer who is renovating the community.

This theater is apparently back in business; an organization called the Cass City Cinema is running a summer festival of films filmed in and around Detroit and the website is indicating a fall reopening and the installation of digital equipment. View link

Cinema Detroit has now moved a few blocks away to a new location at 4126 Third Street. Website: http://cinemadetroit.com/ What has become of the Burton Theatre, I have no idea.

A new page needs to be created for the new location of Cinema Detroit using the information in Trollyguy’s comment. The house on this page, the Burton Theatre/Cass City Cinema, is currently closed.

Cinema Detroit and others are sueing Landmark Theatres:

Four independent film exhibitors today filed a lawsuit in the U.S. District Court for the District of Columbia against Landmark Theatres, a national chain of specialty film theaters, claiming that Landmark, in violation of federal antitrust law, has denied them access to specialty films they sought to exhibit.

“We did not reach this decision lightly,” said Andrew Rodgers, Executive Director of the Denver Film Society. “After years of trying to work within the system and talking with partners and peers about how we can overcome the unfair competition we face from Landmark, we have come to the painful conclusion that this is a nationwide problem that affects the entire independent film community. The deck is stacked against community theaters like ours, and the only way we can solve the problem we all face and serve our audiences properly is to seek a remedy through the courts.”

To exhibit a film, a movie theater must obtain a license from the film’s distributor, which is responsible for marketing the film and acting as a middleman between the production studio and the theater.

The suit claims that Landmark’s business practice of “clearing” films – an agreement limiting a film distributor’s ability to provide other theaters with a license to screen a desired film to the public – is harming marketplace competition by excluding independent movie theaters from screening the specialty films necessary to their competitive success. In addition, the process is reducing output, restricting price competition, and denying moviegoers their choice of theaters to see select films.

Landmark, a private corporation that forms part of a group of companies owned by venture capitalist Mark Cuban, is the self-described dominant theater chain, with a nationwide “circuit” dedicated to exhibiting specialty films in the United States. The company operates 51 theaters with 242 screens in 22 major metropolitan areas, including theaters in each of the plaintiff’s local markets, Denver, Detroit, and Washington, D.C.

Landmark controls most theaters and screens showing specialty films in the plaintiffs’ locations – and uses its national “circuit” power to prohibit independent theaters from showing those films. The result is that these independent theaters, many of them run as non-profits, are often prohibited from showing the high-profile specialty films its audiences want to watch, injuring the theaters’ economic prospects.

In Washington, D.C., Landmark repeatedly blocked West End Cinema from showing films at the same time as its own theaters, forcing the theater to shut down in 2015. One month after West End Cinema closed, Landmark acquired the building lease and opened its own theater. “After more than four years of unrelenting anticompetitive squeezing by Landmark, I was forced to close West End Cinema on March 29, 2015 – which was followed less than one month later by an announcement that Landmark was leasing the space and ‘reopening’ it as the Landmark West End Cinema,” said Josh Levin, a co-founder of West End Cinema. “So they killed me and my business, then moved into my house.”

The other three theaters represented in the suit allege that Landmark’s anticompetitive practices and the continued use of its national “circuit” power prevent them from obtaining desirable specialty films.

In Washington, D.C., the Avalon Theatre has faced significant competitive challenges with Landmark since the Avalon opened as a nonprofit in 2003.

In Denver, since 2010 when it opened the Sie FilmCenter, the nonprofit Denver Film Society has been unable to book a single film that Landmark was also showing locally at one of its theaters.

“I wish that this legal action was avoidable,” said Paula Guthat, co-founder of Cinema Detroit. “Unfortunately, Landmark actively engages in unfair business practices that limit our ability to screen certain types of films in the metro Detroit market. It’s unfair to us as a business and to our patrons who look for Cinema Detroit to offer the best in independent films and documentaries.”

“Landmark went to court to fight against clearances for the films it wanted to show,” said Bill Oberdorfer, Executive Director of the Avalon Theatre. “We are doing the exact same thing and simply asking for the same opportunities with respect to specialty films.”

The suit seeks monetary damages and an injunction prohibiting Landmark from seeking clearances against plaintiffs’ theaters. The plaintiffs are represented by Hausfeld, a global litigation firm with expertise in antitrust law.

About the Avalon Theatre

Avalon Theatre Project, Inc. is a nonprofit, community-supported film and education center in Washington, D.C., which runs the two-screen Avalon Theatre, the oldest operating movie house in the area. The historic Avalon Theatre has been a cornerstone of Northwest D.C. since its opening in 1923, and offers exciting and diverse film programming in a comfortable and accessible venue. Avalon Theatre contact: Bill Oberdorfer ( or 202-966-2149)

Founded in 2013 by two lifelong Detroiters, Cinema Detroit is a nonprofit movie theater located in Detroit, Michigan. As Detroit’s only seven-day-a-week truly independent movie theater, Cinema Detroit aims to deliver an eclectic, quirky, and quality mix of films in the heart of the city and provide a community gathering place for the community dialogue that they spark. Cinema Detroit contact: David E. Rudolph at D. Ericson & Associates Public Relations ( or 313-605-3600)