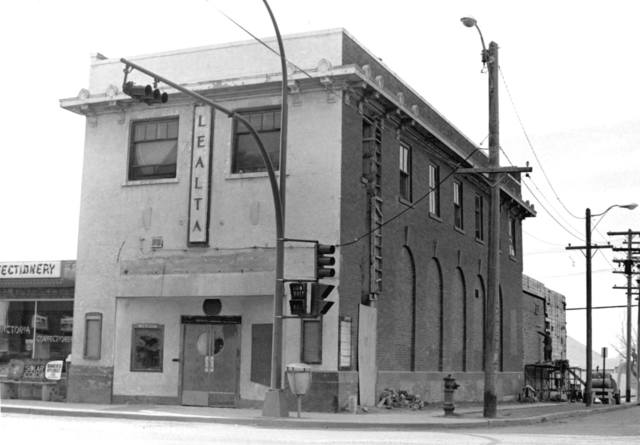 The Lealta opened in 1938 on the site of the old Monarch Theatre in Lethbridge.

This was in the Lethbridge Herald on 12/30/40. It looks like the owner opened the Lealta in a new building in 1940 to accommodate increasing business.

An attractive addition to Lethbridgeâ€™s showhouses, the new Lealta Theatre on 13th Street North, will be officially opened with a New Yearâ€™s Eve preview starting at midnight, Tuesday night. A double bill at regular prices is offered by Manager C. P. Doughty as an opening attraction at the new show house. “Buck Benny Rides Again” and Joe E. Brown hit “Beware Spooks” have been booked.

The public is invited to enjoy the New Year entertainment at the same time inspect the cityâ€™s newest theatre. On January 5, 1938, Mr. Doughty opened the original Lealta Theatre immediately south of the new block. Lethbridge theatre-goers expressed their appreciation by giving the showhouse increasing patronage, necessitating the present expansion. The new theatre has nearly twice the seating accommodation of its predecessor.

Grand opening ad from January 5th, 1938 can be found in the photo section.

Currently a game shop with apartments on the upper floor.