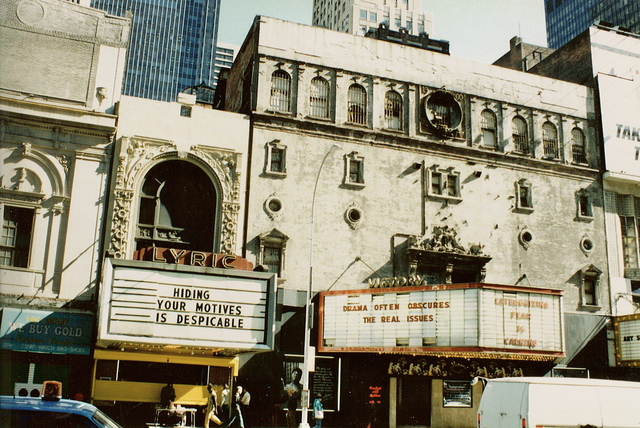 For over 105 years, the New Victory Theater has stood stoically along the ever-changing landscape of New York’s famed W. 42nd Street.

Built as a legitimate theatre in 1900, as the Theatre Republic, the architecture and design of the theatre heralded a new era in showmanship and exhibition. In 1902, David Belasco took over the theatre and renamed it the Belasco Theatre.

By 1914, the theatre was renamed again, as the Republic Theatre. The theatre continued its run as a legitimate theatre until 1932, when it became Broadway’s first burlesque house.

By the 1940’s, the theatre was renamed Victory Theatre and began to show second-run movies. When W. 42nd Street’s fortunes plummeted in the 1970’s, the Victory Theatre became the first to show pornographic movies and continued doing so into the late-1980’s.

In 1990, the Victory Theatre came under public ownership, in an effort to revitalize W. 42nd Street. Leased to a nonprofit organization, the theatre’s renovation began in August of 1994 and was completed in December 1995 at a total cost of $11.4 million.

The theatre is now re-opened as the New Victory Theater (not Theatre) and remains a vision of beauty and a catalyst for all that has evolved on W. 42nd Street.

Article about Time Square with a photo of the Victory and other theatres.

Looking for information for Brandts Victory theatre. My dad went there in the 50’s and got a 5 x 7 pic of Frankenstein. It says on it-I’ll be scaring you Frankenstein at the Brandts Victory Theatre 42nd and Broadway. Was wondering if this was just that they were showing the movie or was someone dressed as Frankenstein showing up at the screening? Any help is greatly appreciated! Thanks!

wolftoy…..if you go to google images and type in “victory theater frankenstein and dracula” you will see a beautiful image of the marquee from around 1952.

I did Wilburg 145. It was no different than all the other theaters on 42nd St. They were all sleezy even first run houses.

I just uploaded a photo from a 1959 NYT Sidney Poitier photo shoot across from the Victory. Good example of the types of double features on 42nd Street back in the day.

Victory in 1971 among others in below link.

Hello- how different is the renovated theater’s interior to what it was when it opened in 1900?