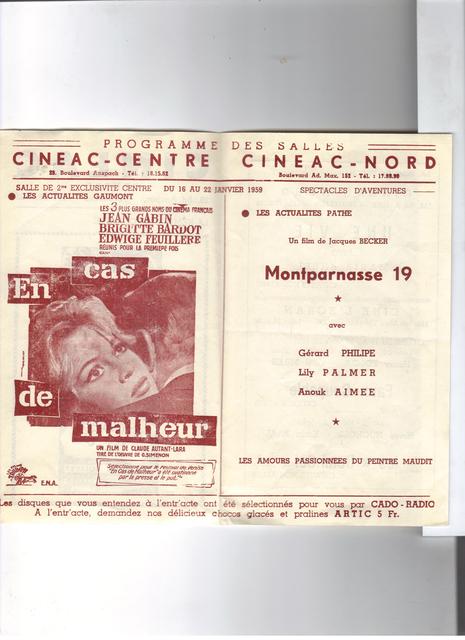 The Cineac chain first opened the Cineac Nord(former Pathe Nord/Splendid Cinema) on Boulevard Adolphe Max. In 1937 the Cineac Centre Cinema opened on Boulevard Anspach as part of the Grand Hotel building. The Cineac chain specialised as newsreel theatres and had similar cinemas in Liege and Antwerp in Belgium, and also in the Netherlands: Amsterdam & Rotterdam, and in France: Paris, Marseille, Nice, Tolouse, Strasborg and Lille.

The Cineac Centre was one of my favorites, as it later became a second or third run cinema with an attrative price, operating from 12 noon to 2am. Marcel Carn’s masterpiece "Quai des Brumes" was shown in 1942. The programming was very interesting, in 1948 "9 Garons et 1 Coeur" with Edith Piaf and Les Compagnons de La Chanson together, shown first run with Trianon Cinema and Monty Cinema. I also saw there "The Sicilian Clan" with Jean Gabin and Alain Delon in 1969. One of the last films shown there was “Les Noces Rouges(Wedding’s Blood) before the demolition of the entire block in 1974.