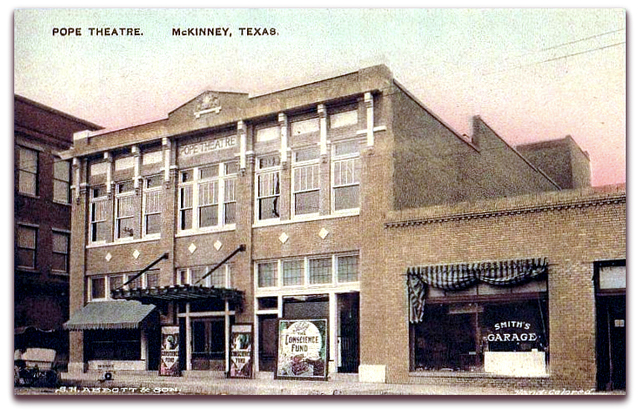 Architected by Lang & Witchell with opening date of June 16, 1913 (or June 14, 1913 – which was advertised but apparently delayed) on North Kentucky Street on the West side of the square. Three people managed the Pope in its run: L.D. Perkins, Charles Kimble and Roy Brockton, Sr.

On June 5, 1945, Mr. and Mrs. Shipman Bullard remodeled the Pope Theatre and reopened it as the Rio Theatre. The theater struggled in the TV era taken over by its last owner, C.D. Barnes. A minor fire early in 1956 caused minor damage fire and a fire on April 18, 1956 appears to end the Rio Theater’s operation despite the building holding up well to the blaze. The building stood vacant for seven years before being razed in 1963.

This old Theatre that was in McKinney, Texas was just down the street from my Grandparents home,and we use to go through it when we were kids because it was closed down and left open for anybody to enter we went through it and it was a very nice place at one time and I think they had live acts there and also movies later on. Their was a ticket booth out front in the early 50’s and what was told to us kids is that a woman was stabbed to death in the ticket boot and after that the theater was shut down I think it was some time in the late 40’s. One could look it up the library in the Newspaper archives but the story is true and as far as it having had a fire, when we were in there I didn’t see any signs of a fire anywhere just a lot of boxes and an old safe in the front office on the right side looking at the front of the theater. The stage was huge and under it was a well in the far right corner of the building under the stage about 20 feet deep and about 30 inches in diameter , It was spooky to say the least. In the front of the building was an office on the right with a safe ion the wall with the door removed and canceled old checks that had been punched and they said Pope Theatre on them, The safe door was removed at some time for safety reasons or some one tried to break in? .Upstairs was the projection room and some old stuff lying around all this was seen by my cousin and I in 1954 during the summer. I hated to see this old theater Razed and now it’s just a parking lot and they also razed my grandparents home too in the early. 70’s. 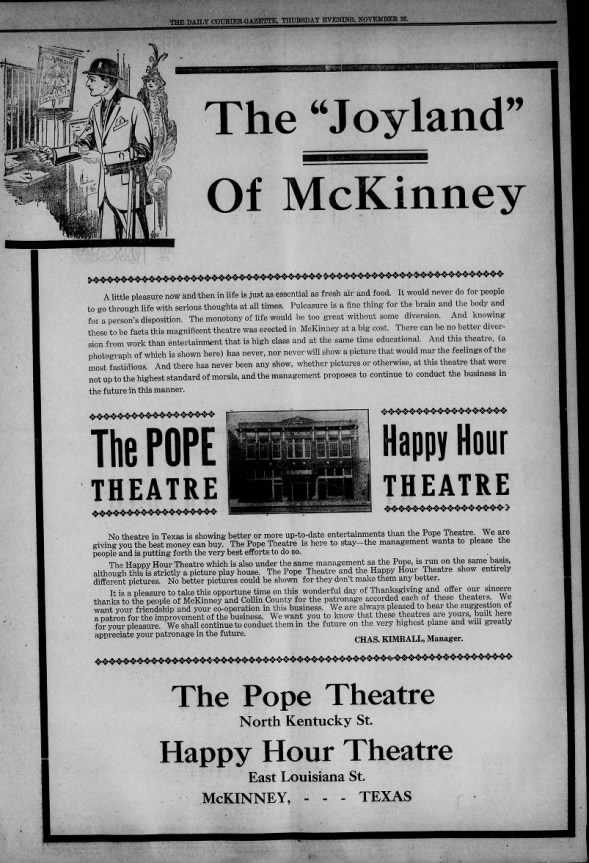