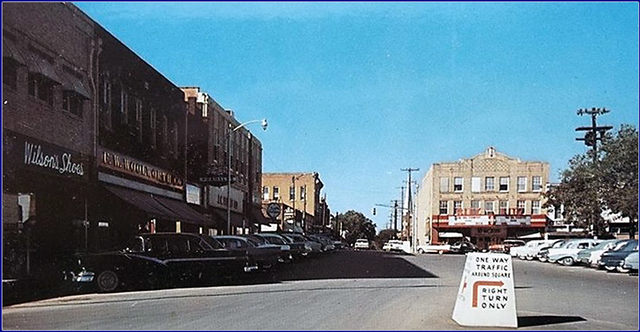 The Ritz Theatre is a two-story brick commercial block building. The Ritz Theatre opened October 8, 1928 and premiered the film “Our Dancing Daughters” starring Joan Crawford, Johnny Mack Brown, Nils Asther, Dorothy Sebastian and Anita Page, and was directed by Harry Beaumont. The film was considered to be an extremely important film for many reasons. For the first time, Joan Crawford revealed her real acting abilities in a meaty role. Its place in the transition between silent films and talkies is also important, as it was one of the last great silent films in the late-1920’s that preserved forever how sound was gradually incorporated into MGM’s major productions. The theatre installed air conditioned in 1929 and stayed in operation as a movie theatre until closing in 1974. It continued being used for special events into the mid-1980’s.

Eventually the building was purchased and rehabilitated into a multi-purpose facility providing retail and service space on the bottom floors and office space on the upper floors.

The Ritz Theatre Didn’t Open That Late In October 1928. According To Newspapers.com, It Opened On October 8th, 1928 With Our Dancing Daughters.

And According To The McKinney’s Courtier-Gazette, The Ritz And McKinney Drive-In Both Closed Separately In 1971. The Ritz Ended Up Shutting Its Doors On December 29th, 1971 With “Man In The Wilderness” Being Its Last Film.

PLEASE UPDATE: The Ritz And The McKinney Drive-In Didn’t Closed On December 29th, 1971. It Continued Until Early 1972 With An Unknown Film Being Its Last Film.

In Late February 1954 Or Early March 1954, The Ritz Installed CinemaScope.

So It Appears To Be That The Ritz Has Been Closed As A Movie House In The Late 1970’s, But Remains As A Special Events Theater Afterwards Into The Mid-1980’s.

The Ritz While Still Running A Mix Of First-Run Closed For Only 1 Day Due To Repairs And A Larger Wide Screen Was Added By Owner Roy E. Brockman Of McKinney Theatres Incorporated On June 16, 1960. A Year Later, Things Will Change And The Format Race Began.

From Early 1961 Until Late 1962, The Ritz While Continuing Its First-Run Success Rarely Began Screening Approximately A Little Bit Of Mature And Restricted Films, But It Only Happens Once In A While During 1961 And 1962. The Ritz Theatre However Continued Its Primary First-Run And A-Attractions Success Such As “The Music Man”, “Safe At Home”, “Rose Marie”, And The 1960’s Three Stooges Features. When 1963 Rolled Along, The McKinney Drive-In Gave A Big Slap In The Face And Switched Back To Its Primary Second-Run And B-Attractions.

On November 16, 1962, Mrs. Charles Nitcholas, employee and ticket counter of the Ritz, was presented with the monthly Chamber of Commerce’s “Most Courteous Employee” award at the Directors' meeting and was named “City Accountant”. 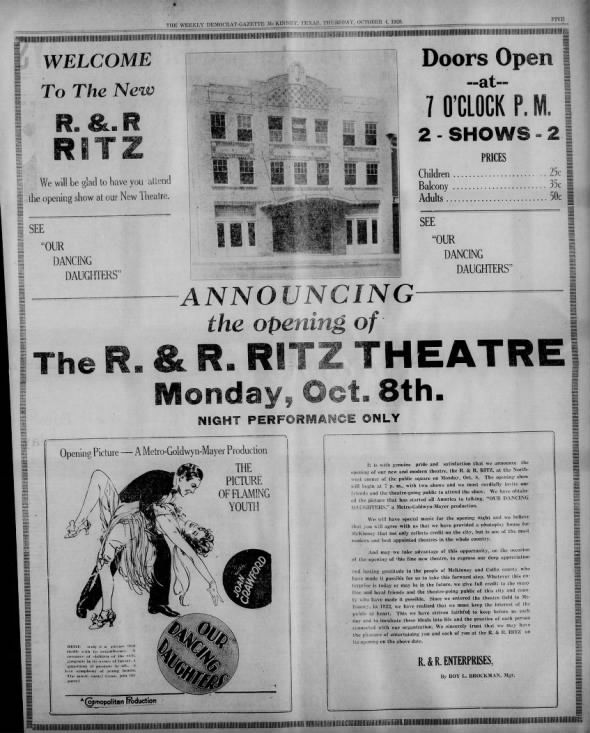