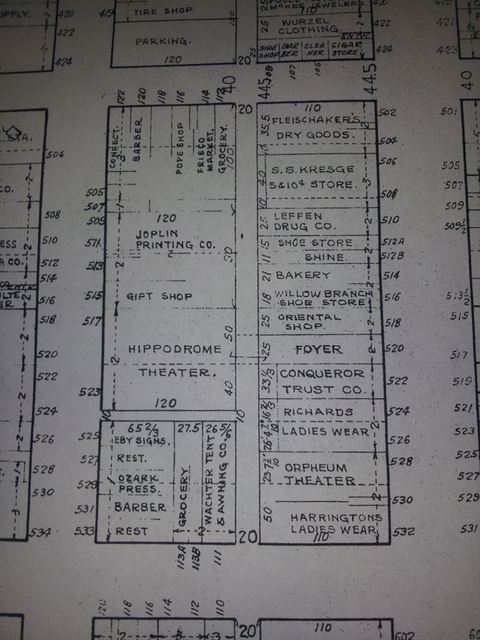 For a town of fifty-thousand residents, Joplin had a good share of beautiful movie palaces. Clustered along the main downtown shopping district were the Fox Theatre, Hippodrome Theatre, Orpheum Theatre, and Paramount Theatre.

All that is known about the Hippodrome Theatre is that it opened on December 21, 1916 and closed in 1934, to become a parking garage. It can be seen in vintage postcard views of Joplin’s S. Main Street. Judging from these images the Hippodrome Theatre sat just a couple of doors North of the Orpheum Theatre, across from the Paramount Theatre.

Google Maps function indicate that the Hippodrome was located inside a "nickeldoen" Neo-Classical styled building that now sits abandoned and boarded up. The auditorium has been demolished. By 2019 the former foyer was in use as a Hackett Hot Wings restaurant.

The Hippodrome was often mentioned in the trade publications in 1925 and 1926, but I’ve found few references to it later. The April 24, 1926, issue of The Reel Journal said that Ben Levy was expending $40,000 on renovating and remodeling the Hippodrome. Half of this would go for a new Wurlitzer Hope-Jones organ. The theater would be closed for the first two weeks of June. The Reel Journal of July 21 said that the Hippodrome had reopened after extensive improvements.

An item in The Reel Journal of October 30, 1926, said that Levy was planning still more major improvements to the Hippodrome, to cost $100,000. The plans for an extensive remodeling were being drawn by Boller Brothers, and construction was slated to begin the following spring. I don’t know if this second round of improvements was actually carried out as I’ve been unable to find any announcements about it in the magazine. Also, the Hippodrome is not on the list of known Boller Brothers theaters (though the list is not exhaustive, so this doesn’t eliminate the possibility that the Bollers did design a 1927 remodeling of the Hippodrome.)

However, the item had the useful information that the plans included “…a bridge over the alley, linking the entrance with the main building, to the mezzanine floor.” Google satellite view shows that the entire west half of the block on which the Hippodrome was located is now occupied by a parking lot, so the auditorium of the Hippodrome has been demolished.

The Hippodrome is mentioned retrospectively in the “From the Boxoffice Files, Twenty Years Ago” features in a couple of later issues of Boxoffice. The March 11, 1950, issue cites a 1930 item about the construction of the new Fox Theatre which mentioned in passing that the Midland circuit “…is operating the Fox Hippodrome in Joplin.” The name Ben Levy appears in quite a few issues of Boxoffice, but there’s no indication that any of these are about the same Ben Levy who operated the Hippodrome in 1926.

The October 1926 article said that the planned remodeling would include an increase of the balcony’s seating capacity to 600, which would increase the total capacity of the house to about 1,700. The existing capacity was not given. Though 1,700 sounds like the usual promotional exaggeration, the Hippodrome must have already been a pretty big theater in the 1920s. The auditorium being across the alley from the entrance means it probably would have had a large footprint, like the Fox.

It’s too bad Historic Aerials doesn’t have anything more than a couple of years old for Joplin. We could see how big the auditorium was, and maybe find out roughly when it was demolished.

In this 1937 aerial view of Joplin a theatre can be seen top left of center. Looks as if this auditroim was across an alley from the main entrnace.
View link

The draft registration form for inclusion of the Main Street historic district of Joplin on the National Register of Historic Places has a little bit of information about the Hippodrome. The entrance to the theater was through the building at 520 S. Main Street, which is still standing. The auditorium (now demolished) was across the alley on the lots at 517-523 S. Joplin Street. The Hippodrome operated from 1917 until 1934, when the auditorium was converted into an automobile garage.

The draft registration form is currently available online here. It’s a large file and has very little information about the four theaters that once existed in the district, but would still be of use to anyone interested in the history of downtown Joplin.

Here is a 1902 photo of C.M. DeGraff Building, aka the Empire Block, which became the entrance to the Hippodrome Theatre in 1917. T.R. Bellas was the architect of the DeGraff Building, which is still standing and is a contributing structure in Joplin’s Sunshine Lamp Historic District. Much of the architectural detail has been removed.

Joe:
Since the Hippodrome Theatre was located within the DeGraff Bldg on S. Main St, then that 1937 airplane view does show the Hippodrome auditorium (upper right postcard quadrant). It is the massive, white, curved roof structure with a atagehouse visible along Virgina Ave.
Haven’t yet been able to outline the Orpheum auditorium.

Dadgummit, I get so frustrated when I make silly goofs!
The Hippodrome auditorium is located within the upper LEFT quadrant of the 1937 postcard.

Hackett Hot Wings is listed at this address now.

Taking a chance here, since these contributions are 6 years old. Ben Levy was my grandfather and my father talked about the Hippodrome Thater. I have never seen a photo of the theater, and do understand sadly that the structure is no longer there. I will be making my first trip to Joplin, and would like to see, at least, where the theater stood. Any thoughts here? You have already provided some great details, much more than anything I ever knew. Thank you so much.