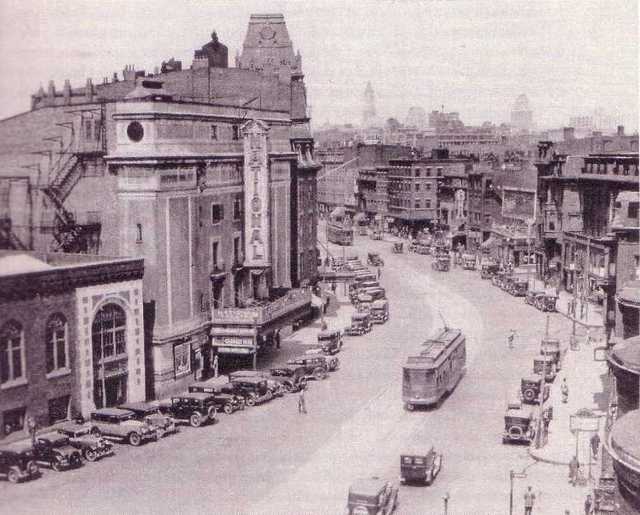 A large balconied movie house a few blocks from the center of Boston in the South End. By 1926 the National Theatre was operated by E.M. Loew’s Theaters Inc. It was a second run movie theatre for many decades, closed, became a neighborhood cultural center.

Hi, I lived on Hanson Street in South End of Boston the early fifties. We went to the National Theater every Saturday for the Matinees. If I remember correctly, the cost was only a nickle for Matinee. There were no ratings on movies at that time so I saw whatever was playing. I remember seeing Niagra in that theater. It was the first time I ever saw Marilyn Monroe and I became an instant fan. My older sister once took me to see The War of the Worlds with Gene Barry. I was so frightened I ran out of the theater. The sound of the alien ships was so big. I had to cover my ears at first but I was so scared I ran out screaming. I remember the look of the theater then. What I saw of it was beautiful and magical to me. It had lovely ornate carvings, and a red velvet curtain opened to the screen just as the movie was about to start. It was a great place to spend a Saturday afternoon. I am sorry to know that it is gone. It had a lot of history for a lot of people.
Leni

Nice memories, Leni ! I, too, thought the National was “beautiful and magical” (and glamourous) when I first went into it as a kid of 12 or so in the late-1940s. There were many plans to try to save it but nothing worked out and it was finally demolished around 1997, by which time it was a battered hulk.

During Christmas week of 1921, the National was featuring the Italian actor Giovanni Grasso and a company of 30 on stage in a repertoire of Italian plays. No movies.

I remember the National Theatre in the mid50’s. It tried to become part of the chitlin circuit(Apollo-Howard. D.c) Uptown(philadelphia)ETC: The shows came in from the Apollo and were here for 7-10 days. There were not too many of them, and they were not successful and were cancelled. The theatre had a huge stage and was greatly under advertised and the area was beginning to become dangerous.

The National is listed as the “Boston Hippodrome” Theatre in the Boston Register and Business Directory, Issue 83, 1918.

This opened as Waldorf on March 17th, 1919. The Central Square theatre in Cambridge also opened on the same day.

When it opened as the Waldorf, it was a name change. It had been purchased by the man who ran a chain of local Waldorf cafeterias. It originally opened in Sept. 1911.

The Theatre Historical Society archive has the MGM Theatre Report for the National Theatre. Exterior photo taken in May 1941 on Tremont St. The condition is “Poor”. There are 1000 orchestra seats, 950 balcony seats and 50 seats in the loges (boxes); total: 2,000 seats. No mention of the second balcony which may have been out of use in 1941.

Hello everyone i am searching for my father who worked as a doorman or ticket sales.. name of anthony “tony” rodrigues ..worked there sometime in the 60s to 70s if anyone could be of help i would greatly appreciate it! Thanks