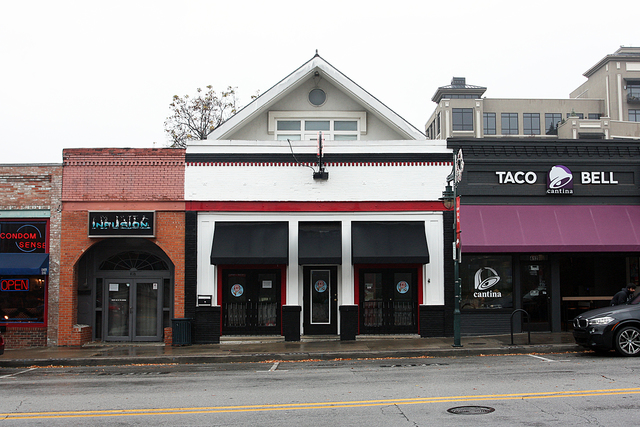 The Palace Theatre opened sometime in October 1926 with seating listed at 746. It was equipped with a Barton 2 manual 4 ranks organ. It was operating as a movie theatre until it closure on November 24, 1968 with Jack Lord in “The Counterfeit Killer” & Doris Day in “The Ballard of Josie”. It became home to the Arkansas Country Opry who vacated the building on May 17, 1974.

Since closing as a theatre it has been used by different restaurants, the latest being a pizza parlor.

On the East Side of Fayetteville’s square, W.F. Sonneman purchased the Baum building in 1925 to raze it in favor of a new movie theater. The Palace Theatre opened in October of 1926 and showed its last movie operating on weekends only at the end closing with “The Counterfeit Killer” and “The Ballad of Josie” on November 24, 1968. But the Ozark Opry then Arkansas Country Opry — which had started playingive music on weekdays in 1966 — continued to use the theater until its final performance on May 17, 1974 which ends the Palace Theatre’s run shy of fifty years.

There’s a problem with this page. It is conflating two different theaters. The Palace Theater was at 21 W. Mountain St on the Square, currently occupied by Tiny Tim’s Pizza; the other (not sure of then name) was on W. Dickson St—I’m not sure about the exact address but it may be 414.